A Mild Case of Taper Madness

Four days to go! I'm still in a pretty good state of mind but I've had a couple of moments of hypochondria/taper madness (which is normal isn't it?) My symptoms? A very slight dry scratchiness in my throat - I haven't had a cold in I don't know how long so it would be inevitable that one arrives just before my debut marathon. But logically I think this is due to minor spring-time allergies. I have the itchy eyes and I think it's the sneezing that's making my throat a bit scratchy. And the throat hasn't gotten any worse.

My other symptom is a twingey hamstring. I've been stretching it and rolling it out but every time I finish running I feel it. The good thing is that I don't feel it while I'm running and it's been twingey for a couple of months now so I'm going to continue to bury my head in the sand about that one and ignore it. I'll deal with it after the big day.

These last few days in the lead-up have been great. Our running group is just buzzing with excitement. With so many of us going down, there's a real camaraderie happening. The team spirit has been helped by having team singlets done and they look great! 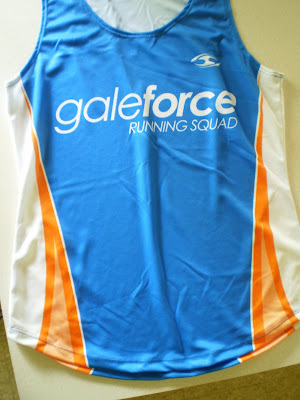 I've had text messages, breakfasts and coffees with different friends who all wanted wish me the best and who are excited for me. Not one of these people think I'm having a psychotic episode or a temporary break with reality. I have some awesome friends!

The last sign of taper madness that I've had is an uncontrollable urge to tell strangers that I'm running a marathon this weekend. Silly, I know but because the urge IS uncontrollable, I've decided to just go with it - even make a game of it. I'm now counting up how many people I've told gratuitously. So far I'm up to six. (you've got to remember that I don't actually have contact with that many people every day) I'm gunning for double-digits by the end of the week.
Posted by Char at 6:14 PM