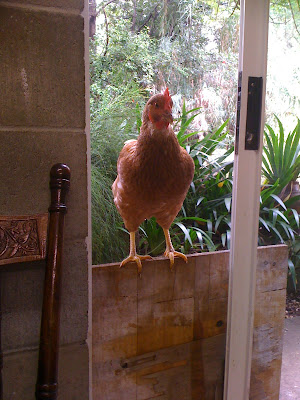 I am sitting here this morning basking in the warm glow that only comes with winning. No, I haven't been racing. Since my marathon I've ventured out only ... let me count them up ... once. What I've won isn't really a competition - except that I've made it so. It's the fact that I was right and my husband was wrong! And my winnings - the right to say "I told you so!!!"

We've been having a few issues with the Rockettes lately. The sun is getting up earlier and they're following suit. And while I have no problem with the time they get up, I have lots of problem with the noise that they make. One in particular is extremely vocal and extremely proud of her work (or she's having issues with haemorrhoids and it's pain I'm hearing). She's decided that the entire suburb needs to know every time she lays an egg. Seriously, we live in suburbia and buy eggs in cartons from the supermarket and we really don't care if you've laid one. The fact that I'm in recovery from the marathon means that I have fewer runs and am trying to sleep in and she has NO consideration at all.

After waking up with my cackle alarm yesterday for the third morning in a row I worked out a potential solution. Iven didn't think it would work but couldn't come up with any alternative. My solution was to cover the cage so the Rockettes would think it was still night. So last night we draped their cage with black plastic and told them that there was a solar eclipse and this morning the silence was golden - apart from the kookaburras and the lorikeets and the cockatoos. Bliss!

So there you go Iven, I was right!! I told you so!! I'm enjoying being able to gloat where it won't annoy you.
Posted by Char at 2:04 PM