Spontaneous decisions were the name of the game this week. Actually that should be in the singular - it was just one decision.

Last weekend we went and chose tiles for our kitchen floor. Remember about a year ago we got our kitchen redone? Well, we hadn't actually finished it. We sort-of stopped after the cabinetry went in. The thing is, I'm not big on upheavals and refitting the kitchen was a pretty big upheaval. And I'm also not keen on making big and expensive decisions that could end up as big and expensive mistakes. We'd had cork tiles on the floor for 24 years and, believe me, they'd seen better days AND they looked even worse with the new cabinets in but still I managed to delay the inevitable this long.

So last Saturday we went back to the tile shop that had been so helpful with advice when we bought the tiles for the splash back. Again they were super-helpful and we came home with a boot full of tiles and the phone number of a tiler. On Wednesday we finally got around to ringing the tiler and within 30 minutes he was here.

The tiler was first generation Australian, originally from Vietnam but I like to think of him as a tiling Ninja. He blew into the house and was flinging words around like Ninja stars. It was a full-on verbal assault - not that he was saying anything nasty, he was just speaking so quickly that when he left you felt like you'd been under attack. Then once he'd made sure you'd understood he just disappeared leaving Iven and I with his card, a quote and a stunned look on our faces.

He'd said he could start the next day but since we had to move the entire kitchen and laundry into the lounge room, we decided to make it the day after. So Friday came and so did a troupe of Ninja tilers. They kept appearing out of nowhere and giving me a fright. They arrived at 8am and were gone by 2pm leaving us with strict instructions not to walk on the tiles till the next morning. I wish I'd known about that when we were getting stuff out of the kitchen. I hadn't taken anything out of the pantry and I didn't have any plates or glasses or mugs or cutlery or any means to cook anything. So Sam came to the rescue. 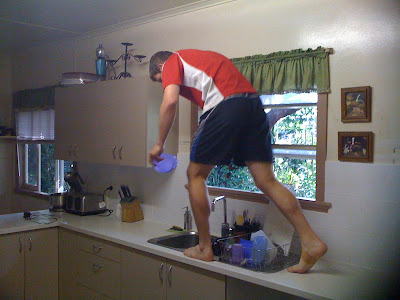 I think there are footprints on my bench tops. 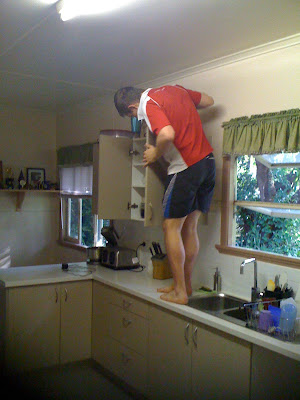 Nelson was quite put out by all the upheaval. He's old now and is quite set in his ways and having to spend all day outside lying in the dirt rather than sleeping on his comfy mattress ... well lets just say that the turkey neck didn't quite make up for it. 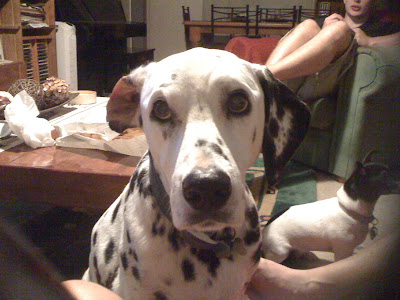