Today I ran. Actually I raced. And, although my time was nowhere near my PR, I had a really fun time.

But when I woke up this morning I almost talked myself into NOT going. It had started raining last night and it had continued to rain all night. And yesterday I'd had a really ordinary run. I'd cut my 20k down to 15 because of today's race and it just didn't feel great. I'd enjoyed the company but in enjoying the company I'd forgotten to take my gel at 45 mins and the run back to my car just seemed hard. And when I'd realised about the gel I'd started to worry about depleted glycogen stores going into the race. My stomach was unsettled for a lot of the day (talk about the Thunder from Downunder) and I didn't really eat well. All in all it was a pretty ordinary lead-up to an event.

But this morning I told myself it didn't matter. I didn't have to race it. I would just get out there and run how I felt.

So I arrived at the University in plenty of time to pick up my race kit and hang around. As Iven and I were walking to registration I heard my name being called. It was my best friend from high school/brilliant physio who keeps me running and her husband. They were doing the 5k too. We picked up our kits, went to the loos and then hung out for a while. I managed to find a couple more running buddies and the 50 mins wait ticked down quickly. Fifteen minutes till race time and I went for a warm up and I was happy with how I was feeling. There didn't seem to be any nasty ramifications from yesterday's run.

I lined up at the start. It's a really small event but small events often mean that there's a lot of novice racers/walkers. And the novices seem to have absolutely no idea that if they're walking they should probably be at the back. Same with the dog owners. Dogs were allowed to be registered participants in the race but I'm all for them being towards the rear of the field and out of the way of tripping up the people who came to race.

The start siren sounded and we were off - sort of. There were a few obstacles to get around - the man with the reluctant Labrador and the family of Samoans in the yellow-feathered hats who were walking abreast. But after about 400m I was clear to actually find a pace.

The course is lovely - along the river on a tree-lined road. It usually starts and finishes on the athletics track but since the floods there is no surface on the track so the route had to be changed slightly. We ran 2 and a bit k's and then did a 180 turn and headed back. I was traveling at around 4:50 pace. We got detoured off the main road onto a side road and then onto a grassy soccer pitch. They'd had to make up the extra distance that they'd lost due to the track being out of service and the soccer pitch was apparently the best option. Well, it would have been if it hadn't been raining all night. It was boggy and really hard to run on and all of a sudden I felt like I was trying to run through mud ... probably because I was. It was only about 600m around but by the time I was back onto the bitumen I'd used up more energy than I'd wanted. The last k and a bit home were long and I was so glad to see the finish line. I stopped my watch at 24:31 - a respectable effort that I was pleased with.

We got shuffled from the finish line down some stairs to the recovery area. It was really well supplied with water and fresh fruit. Watermelon would have to be the best post-race treat ever! I picked up my gift bag and headed off to find Iven. Then we both headed off to our favourite cafe to have breakfast and it's then that I realised that I'd forgotten to give him the camera to take any pics of the race. But I did get one shot in the end. 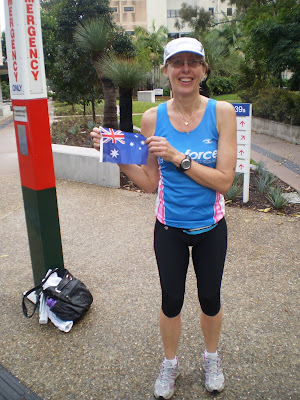 PS - Just found out that I finished 31 out of 381 competitors (not including the doggy ones) and 9th out of 226 in my category (18 years and over) And I DID manage to beat the dachshund but the little white terrier left me eating its dust.
Posted by Char at 11:28 PM