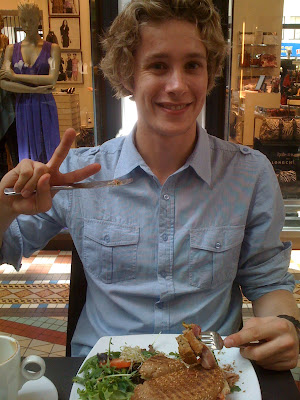 The world is full of mysteries - questions that have no answers. And there's a mysterious situation that's been happening at our house on and off. It all centers around Josh.

He's been a little prone to infections lately. I think it's all from burning the candle at both ends. Working hard, playing hard, not sleeping enough - the sort of thing that would put anyone over 30 in hospital for a week suffering from exhaustion. He's had a couple of upper respiratory tract infections lately. But that's not the mysterious thing. The mysterious thing is that whenever he's laid low, an Angel of Mercy arrives at our front door. Usually the Angel of Mercy is bearing chicken soup or Tiger Balm or Multivitamins. And these, usually beautiful, girls always stay for hours ministering to his every need. Where they come from, I don't know. And they usually just disappear in the wee hours of the morning - just like the elves in The Elves and The Shoemaker. It's all very odd.

I attempted my Kick-Up-The Backside run again today. My aim was to run 2 x 2k hard in the middle of an 11k run. It was partially successful. Successful in that I ran all four of those hard k's at sub 5min pace (4:48, 4:47, 4:55, 4:43). Partially was because I had to stop to go to the loo just before the last k. I blame Iven for my necessary toilet stop. He gave me some of my favourite lollies for Mother's Day. Lollies which I have very little control over my consumption. Lollies that I may have eaten just a couple too many of yesterday. Lollies which contain the known laxative licorice. Ah well - it made that last k really fast.

I'll finish on a bit of a sad note. My alarm clock of 15 years finally died this week. Apparently I dropped it one too many times and it will no longer alarm me. Of course it had to happen on the day of speed session. I woke up at 5:47 instead of 4:55 which meant that they'd started without me. There was a little mental swearing, a morning of regret and then the purchase of a brand spanking new clock. May it ring for another 15 years.
Posted by Char at 6:19 PM