It often starts with three little words that just whisper around your brain. "I wonder if..."

And that's how I found myself running around a mountain on Sunday morning.

I used to run hill sessions every week. I'd head up to Mt Coottha every Thursday and meet up with the squad (because misery loves company) to flog ourselves for an hour . Then I'd drive home feeling smug and content about what I'd just done. Don't get me wrong - I'm not a strong hill runner. I'm slow and I hate hills. But because I'm slow and hate hills the achievement every week seemed so much better. And I think I improved a little bit over time.

Then I hurt my hamstring. And I stopped running hills to let it recover. And while it was recovering I had another bout of over-training syndrome thanks to my non-existent testosterone levels. All of a sudden it was enough just to be able to run a little bit - very slowly and on flat routes.

But I've been training for almost a year without any issues now. I've racked up a few thousand kilometres and run seven races this year including three half marathons and a marathon. And suddenly that thought started to play in my brain. "I wonder if I can run Mt Coottha again".

I tried to ignore it at first. Remember, I don't like running hills and I'd lost all my confidence. But those voices in my head just wouldn't let up. And we all know that it's important to listen to the voices in your head and do what they say!

I talked it over with Coach Chris. He was confident that I was ready and I could come join the group that very week. I was confident that I needed to run a few times by myself to build up confidence before I joined in with the group. So he gave me his blessing and that's how I found myself parked at JC Slaughter Falls at 5am on Sunday morning wondering if it really was a good idea or not.

It's pretty quiet on the mountain at that hour on a Sunday morning. And I was grateful that the only potential witnesses to my 'failure' (ie - walking) were ones with feathers. My plan was to take it very, very slow up the main rise (about a 2.2k ascent) then see how I felt once I got to the undulating part around the top.

The first kilometre was fairly flat - a good warm up before I had to climb. And then it was up. It really didn't take long till I was breathing hard and I was going pretty slowly. But all I had to do was keep putting one foot in front of the other and block out thoughts of walking. I distracted myself looking at the birds. The scrub turkeys at the side of the road that found my speed so un-threatening that they couldn't be bothered moving when I ran past them at the speed of a glacier. The crow on the road that was pecking at what I thought was roadkill but was actually a discarded Gu packet.

I got to a point that I remembered from my old hill sessions that was about 2/3 the way up that section and that made me happy. And when I could finally see the first TV station tower I was even happier. But when I finally made it to the crest I was elated. Who cares if it took a long time? I hadn't stopped and walked once!

From there it was all undulations. Yes, there was still quite a few uphills but there were as many downs where I could catch my breath. And there was time to reminisce about hill sessions of yore. Like the time I first got to run the whole way round the mountain. And the time I tripped on a tree root and finished the run with blood running down my arm. Then there was the time that I had to duck behind a tree - or should I say times? The best thing about running on Mt Coottha is that there is no shortage of places to squat in privacy.

Before I knew it I was at the summit and it was all downhill. This is the best part of the run. The view over the city is spectacular. The running felt fast and easy and for a moment I was king of the world. Or should I say queen? 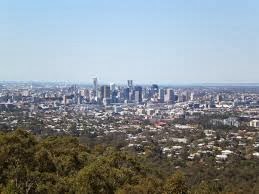 I was back at the car 55 minutes after I'd left feeling like a rock star. Or a Kenyan - a very slow Kenyan. Then back home to find Iven ready to head out for breakfast. Best way to start a Sunday!

And just a little side note. Iven proved again what a loving, attentive husband he is when we were out at breakfast. I chose something different to my normal eggs on toast and went for the bircher muesli with a berry compote, almonds, walnuts and yoghurt. Yum but not the wisest choice for someone who's lactose-intolerant.

I'm not sure what I was thinking. Maybe the post-run endorphins had addled my brain. Or maybe I'd forgotten that the yoghurt I eat at home is lactose-free. Either way it was a choice that could only end in pain and suffering.

Iven asked me if I had any of my tablets on me. Silly question. My handbag is a virtual pharmacy - ibuprofen, paracetemol, valium, zantac and lacteeze. I still hadn't realised that there was a potential disaster on my hands - or in my stomach - so I didn't understand what he meant. It turns out that it was the lacteeze he was talking about. It's a form of lactase to help digest the lactose.

How thoughtful! My wonderful husband (see, I don't always want to kill him) cares so much about me that he didn't want me to suffer. Or maybe he just didn't want a whiney, flatulant woman sharing the bed with him. Either way he's scored some brownie points there.
Posted by Char at 6:47 PM