It had been a long day yesterday.

I hadn't run in the morning - my legs were still tired from quite a bit of running on the weekend including a downhill run while I was spectating at an event. 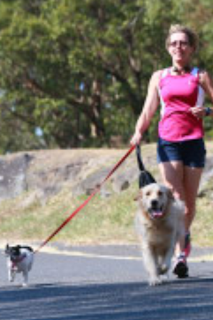 Tuesday's speed session just seemed to make them more sore. So, seeing as I don't have an event even remotely soon, I chose to give them an extra day's rest.

But as much as my legs needed a rest, my head needed a run. There'd been a few things playing on my mind this week and a run is always a good way to process and defuse. Sleeping in just doesn't clear the head quite as well as a run does. So as the day wore on I started to let the things that had been bothering me build up - sometimes working by yourself isn't such a great thing.

It got to 4:30pm and I couldn't stand it any longer. I just had to get out and send all those negative thoughts out into the universe. I wasn't planning on running - just taking Toby for a walk.

But there was a little glitch to my plan. I'd been watching a band of storms on the weather radar all afternoon and it was headed our way. I was pretty sure, though, that I could do my loop and be home before they broke.

Toby was so excited to be going out. I can be a bit hit and miss with walking him. It's always been Iven's job to do while I'm cooking dinner but while he's had his bad back the responsibility has fallen to me. Toby's last walk had been Monday.

We headed up out of our hollow to higher ground and it's there that I realised that the storm was a little closer than I'd expected. The skies were ominous but the lightning and thunder was still a way off. We could do this - but only if we ran a bit. 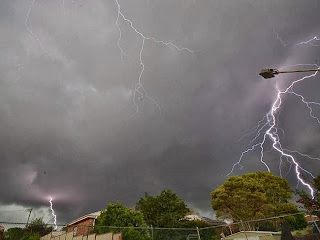 Toby's getting a lot better at running on a lead. He still will lie down if he's had enough but he doesn't get to that point as early as he used to. His endurance is definitely improving. And yesterday he seemed to sense the urgency - or he was full of energy because of his missed walks - either way he was running as well as he's ever run. We did have to momentarily stop for a call of nature. And yes, I had my poo bag at the ready. But once that business was done there was no stopping him.

We ran along past my Mum's house and just up from there I saw my sister driving home from walking her dogs. She stopped and offered me a lift but I declined. I'd set myself a challenge and I was still sure that we could do it. So we trotted on.

And then it happened. That dreaded feeling that so many runners get after a couple of kilometres. Of course I had to go to the toilet! And of course the toilet was just that bit too far away for me to keep running!! Running just made things worse. We had to slow to a walk. A very fast walk. And when things had settled we ran again until we couldn't.

There are some days that I'm grateful that I know where every toilet is on my routes.

It was only a relatively quick stop but the damage was done. The wind had picked up by the time we started again and it had started to spit. Big, heavy droplets of rain. I started to worry about my sister's mention of hail and the fact that I'd commented on Liz's last post that I'd never run in a hail storm. That was tempting fate!

There was just over a kilometre till we reached home and Toby gave it everything. He bounded along with me in hot pursuit. He was loving it! For a dog who's a bit on the timid side (he's scared of strangers and big purple stuffed ponies - he's xenophobic and pediozoophobic), he doesn't mind thunder or lightening.

Five hundred metres from home and the heavens opened up on us.

The race was over and we'd lost. But there are no real losers in running. I felt great. Toby felt great.(But smelt pretty awful. Wet dog isn't my favourite scent but it is a big step up from cat wee) 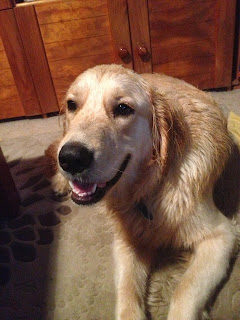 And  the few calories burnt meant I could justify a little bit of this. 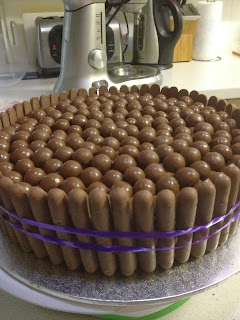 It's not every day that your baby turns 20! 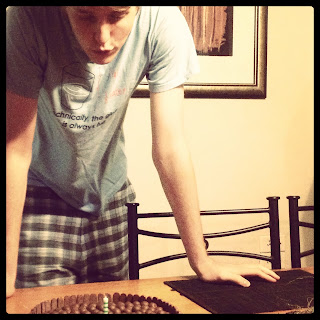 But best of all that run let me smile and mean it when we took the obligatory family shot for the Christmas newsletter. 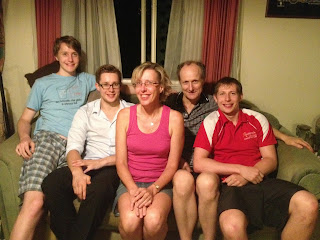