Every running session has a purpose.

Tuesday's speed session is to do exactly that - improve speed. Sometimes we work on overall speed and sometimes (with the long reps and shorter recoveries we're focusing on speed endurance.

My Monday and Thursday runs have now become Tempo runs which are to improve lactate threshold. Or, in layman's terms, improve the ability to be able to run faster for longer. It's also a session where I can improve my ability to judge pace - which, despite running for very many years, is something I'm still not very good at.

I'm aiming to go back to the hill sessions soon and they're all about building leg strength. But before I go back to running hills with the group I want to do a few remedial sessions so I don't have to walk for the entire 60 minutes.

And finally the Saturday session is to work on endurance. Except last Saturday's session.

That's not actually true because the session was focused on endurance but it did have another goal. I could be nice and say this goal was to prove Coach Chris's theory - that humans are creatures of habit. If you run, you will probably tend to run at the same times every week and down the same routes. This is a fairly innocuous theory but the reason we were trying to prove it was not quite so innocuous so I don't have to be nice when I explain the real goal of Saturday's run.

The real goal of Saturday's run was to find last week's vision of loveliness so Coach Chris could see for himself what all the fuss was about. And maybe invite her to join the group (I had been assigned that role because it's not so creepy to a young woman to have an older woman ask you to join something whereas a group of enthusiastic middle-aged men asking her to do the same might be a bit off-putting.)

Last week Coach Chris had decided to go to Noosa for the triathlon and so he totally missed seeing what no other male runner on Coronation Drive bike path did. To say he was disappointed would have been an understatement so he hatched a plan whereby we'd be running along the same stretch at exactly the same time of day.

He'd grilled other members to narrow down the time frame. We needed to be running back to the Regatta from the Go Between Bridge at 7:04 precisely.

But she wasn't. Palpable disappointment!

I didn't realize that it had meant that much to him until we reached the end and I said casually that his opportunity had passed. All he heard was 'passed' and assumed that I was telling him that she was running past. I have never seen a man swivel his head that quickly! I'm surprised he didn't end up with whiplash.

And he wasn't the only heavyhearted runner that morning. The mood was a lot more somber over breakfast.

It might have been a good thing though. Sometimes when you paint a picture for some else they might not appreciate it quite the way you do. Coach Chris may not have found her the stunner that everyone else did and this way she can remain an enticing, exotic legend. A sylph-like creature who may or may not exist like a mermaid or the abominable snowman. Or a beautiful girl riding a unicorn a little like the one below - only wearing an outfit no bigger than a handkerchief. 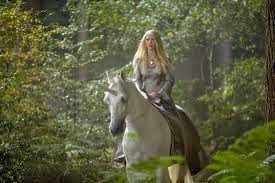