I think the last time we had a weekend away together was when I did the Sunshine Coast half marathon in August '13. Since then there's been lots of reasons why it hasn't happened. Bad backs, family issues, dog-sitting and general lack of interest in spending Sunday morning hanging out in the cold (and sometimes wet) for hours to catch a fleeting glimpse of his beloved. I can't imagine why he wouldn't find that exciting.

But this time I've managed to entice him with softly whispered promises. Promises so seductive and alluring that they've enticed him away from the cosy spot on the couch and the remote control. Promises that I'd like to think that most men would find hard to resist.

Yes, I've promised him unlimited access to as many cafes as his heart desires. I've promised him a meal cooked by someone who actually knows how to cook and has more imagination than I do. That effectively means he won't have to eat stir fry chicken on brown rice, spag bog or slow cooked lamb rogan josh (sauce from a bottle). And I've promised him that he won't have to get up and stand in the cold and watch. He can just tottle over from our accommodation to be at the finish line some time after 8:00am.

And as long as he behaves himself I may even ask him to do it again. Cause I'm kind like that.

Should be quite a fun weekend. And I'm not even saying that sarcastically. I'm actually really looking forward to getting away. To not having to cook. To stuffing myself with carbs tomorrow. And to just getting out there and giving it a crack. And I'm not meaning the 'Fat Amy'-type crack from Pitch Perfect 2. 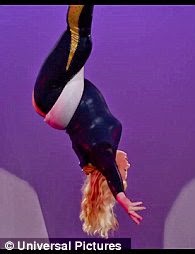 As usual I have some fairly underwhelming goals going into this race. I want to be able to think about the race without getting any nervous jitters (so far so good). I want to be able to eat on Saturday (which I can't do if I'm nervous). And I want to line up on Sunday morning feeling relaxed. As far as times are concerned I'm not doing too much thinking about that. I'd love to run as fast or faster than the Gold Coast Bulletin Half but if I don't the world won't stop turning. But if I do I'll be treating myself to a post-race ice cream. And I've already packed my lactase tablets.