Why I Bought New Undies Today. 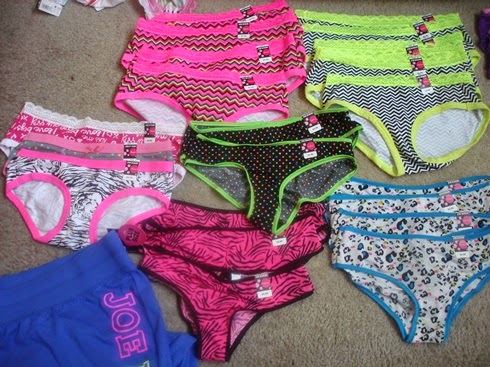 Yes, earth-shattering news from my little corner of Brisbane. But the story really doesn't start there. That's the finale. How I got to that point is the real story and I will be presenting it in the flash-back format so often employed by good screenplay writers in the hope that someone, somewhere with some amount of clout in the movie industry reads it and wants to make it into a feature film. (And on a side note I think Cate Blanchett would be perfect playing me because we're almost twins!)

Checking on the weather forecast yesterday I was aghast to see that it was going to hit almost 30C. Almost half way into autumn! The weather check is a daily event so I can work out which of my uniforms I'll wear - the summer one (denim skirt, t-shirt and sandals) or the winter one (jeans, long t-shirt and closed-in shoes). The summer weather forecast dictated my garb. I tossed on the denim skirt without a second thought as to what was ahead of me and how my poor time management was going to impact on my day. (Cue ominous music - I'm hearing the theme music from Jaws)

I'd planned to be out the door just before nine so I could be at the shops and ordering my coffee as soon as my coffee shop was open. But I got talking. And I waffled around a little cleaning benches and filling up dog bowls and plumping cushions. And as it turned out didn't get to the shops until quarter past. I checked on my phone while I was waiting for the coffee to be made. The Jaws music swells slightly as I see the reminder on my phone screen - Physio appointment at 10:00

But who notices time relentlessly marching on when they're engrossed in puzzle solving? Obviously not me. And I couldn't leave one particular section while I was on a roll. I kept telling myself that there was still plenty of time until I really couldn't delude myself any longer. I was going to be late if I didn't move! And move fast.

It doesn't actually take 5 minutes to get to the other end of the shopping centre. Not when you're race walking. And I was in and out of the grocery store in five and back to my car in virtually no time. I totally had this. I was going to make it on time!

And I did. I got there with a couple of minutes to spare, sat down and realised my fundamental error.

Since I've graduated university in 1985 I've used the same physio. My best friend from high school. But Chris has just sold her practice and is moving into academia so it was time to find a new one. I used to rock up to Chris's and just whip off my skirt when she's treating me. That's fine when it's your friend. Probably not so acceptable when it's a complete stranger. Maybe should have worn shorts.

Peter (yes, this complete stranger was a very attractive male in his thirties) took me into the cubicle and got me to lie on the table to test my hamstring flexibility. He took one look at the skirt and asked "so are you respectable under there?"

My mind flashed back to when I was dressing that morning and couldn't for the life of me remember which pair of undies I'd put on. Stupid Lumosity isn't working as quickly as I need it to. I know that there's one pair with a very small hole in them. But I can't bear to throw them out because they're such a pretty colour and who would see them anyway? That question was answered yesterday.

I answered that I was wearing undies and that seemed good enough for him. Which makes me wonder if he's had some 'surprises' in the past.

Apart from the don't-know-which-pair issue, I wasn't too worried about exposing myself. Could be that birthing three babies with audiences, years of internal exams and pap smears and being walked in on by an NRL player who didn't know the difference between male and female while I was having a shower at UQ have made me a little less modest. So once my skirt was up I let it stay up. Poor Peter was more concerned for my decorum than I was. He kept trying to pull it down. Sweet boy. But not very flattering.

He diagnosed me with an extremely tight left hamstring and gave me a massage and some stretches to do daily. Then he finished with some acupuncture. Because he's multi-talented and really wanted to show off. He stuck the needles into my leg and left me lying face down for about ten minutes. Plenty enough time to have me pondering the length of time since I'd last shaved my legs.

We catch up again next week to see how the stretches and tennis ball massages are going and be assured that I've put a couple of reminders into my phone. The shave is scheduled for Tuesday. Shorts are on there for Wednesday. And if my phone dies between now and then at least I'll have some nice new undies to show off.
Posted by Char at 8:10 PM