It's been a while since I've blogged. Over a week!

I'm feeling like a bit of a bad blogger but I've been busy. Unfortunately not with media engagements, which would be justified given my recent running exploits. I can see the headlines now - Geriatric Runner Breaks PB.

Work, running, family, running, sleeping, running. Yes, all that excitement has been happening in my life - stopping me from sitting down at the computer and sharing. But I'm here now to give a quick catch up of the week that was.

One hundred and five is the big news. That's the number of kilometres I logged in a seven day period. My biggest week ever! It was only that big because of the Sunday race and Saturday 37k long run book-ends - none of the rest of my marathon training weeks will be that big.

I'm pretty pleased with how well my body has held up to the demands of a week like that. Not so pleased with how my brain coped though. I know running is supposed to be good at warding off dementia but I think there's a distance that, when passed, is the point of diminishing returns. I've had a couple of bouts of marathon brain. Like not closing my shampoo bottle properly and finding shampoo all through my toiletries bag. And not packing a shirt to put on after my shower yesterday after speed session. And let's not forget (although I probably will - because marathon brain) all the times I've gone into the supermarket in the last week and looked at the shelves knowing I was there for something but not being able to pinpoint what.

Then there's been the fun and games of having two cone-of-shame-wearing dogs in the house. Ricky had a little procedure done to hopefully eliminate the X-rated floor show that we have to watch every evening. It's been a dangerous house to live in since he's come home. He and Toby have decided that wearing a bucket on their heads shouldn't stop them from having fun. It's even helped them invent new games like bucket jousting and pin-your-owner's-head-to-the-floor-while-she's-stretching-and-lick-her-face-till-she-squeals. That one's a little dangerous for the owner if the bucket placement isn't quite perfect. And in the meanwhile the X-rated floor show has continued unabated. I guess it takes a while for the hormone levels to go down. 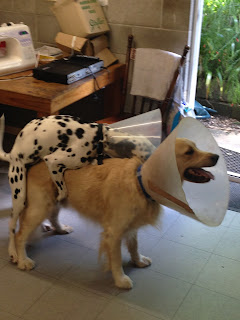 There's also been a visit from my prodigal son. So I did like the father did in the bible. I baked a cake. Which is my version of killing a fatted calf. Poor Sam's had to see all the birthday cakes on Facebook for the past year and a bit and just imagine how they'd be tasting so how could I not bake him a cake? The fact that I'd seen this on Pinterest or Instagram (can't remember which - because marathon brain) and desperately wanted to give it a go was not a factor at all in the cake-making decision. 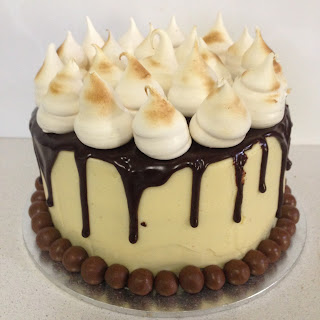 Work's been pretty busy too trying to get out as much as I can to my machinist before she heads off on a three week trip to Canada. How dare she have her first holiday in the 20-odd years of working for me! Should be an interesting time without her. I'm pretty sure that sewing's a little like riding a bike. Let's hope I haven't forgotten how.

And finally there was a little incident where I found myself in a dark, deserted park with two younger men in a fairly compromising position this morning. It's not often that any man other than my husband has been allowed to put his hand up my top. And I've certainly never had an audience before but hey, you only live once. My only regret is that it was the coldest morning of the year so far. Cold fingers!!