We only had to run 20k on Saturday.

Years ago it would have seemed crazy to put 'only' in that sentence, It would have been shouted from the rooftops and bragged to any stranger who was brave enough to get close the the crazy lady who was randomly shouting from tall buildings.

But perspective becomes warped when you run stupid distances and what once was a hugely long way becomes a merely. A just. An only.

And because it was our last 'long' run before Gold Coast (next weekend's is 12k and that barely deserves the respect of the title 'long run') we'd planned something a little bit special. It was an idea that had germinated on the run many weeks before when we found ourselves running through a farmer's market over halfway through a run. Many more runs through this market when the coffee was brewing, pancakes were cooking and bacon was frying and we'd been running for over 20k consolidated the idea into a real plan. We were going to run to the market and have breakfast there.

So we planned to meet there for a 5:00am start. Ahh - the luxury of a little sleep in!

The drive to the park took all of us through the Valley - Brisbane's nightclub hub. Always interesting people-watching there. The skimpy outfits and high, high heels. The staggerers. The ones who've decided that bed is just too far away for their needs. It's really only the crazy people that are up and about at that hour but our crazy is so much different to theirs.

The plan was to run a nice, easy 20k. Because we're in taper mode and taper is all about recovery. And it did start easy. Trotting along. Chatting about marathons and goal times and paces and weekend plans and future running goals. It was cold and very dark but I like running in the dark. The kilometres seem to disappear quicker and more easily.

We reached our turnaround point and started to head back just as the sun was rising and that's when the pace started to pick up. I didn't really notice it to start off with. One minute we were just running and the next I was feeling like I was working harder. By the time we hit the park we were almost flying - for us. I'm not sure if it's that we're competitive or if the lure of the coffee was that strong but we finished on a 4:34. Or at least I did and I certainly wasn't at the front of the group.

That's the last run we'll have as a group before Gold Coast. Next week's 12k will be with the whole squad. It'll be great to be back running with them but on the other hand I'll miss the intimacy of the smaller group. There's a special sort of bonding that happens when you all have the same goal and you're all putting in an extraordinary effort to meet it. Camaraderie, support and friendship all grow over the miles that you put in together.

When I think back on this training block I'll have lots of fond memories. Of meeting before 4:00am. Of complaining about having to meet before 4:00am. Of slogging up hills. Of watching Adrian bound up steps two at a time while we with shorter legs lag behind. Of messages sent and received on Fridays organising the where and when of the next day's run - we didn't need to explain the why. And of sitting at a park bench in New Farm Park trying to soak up some sun for warmth and cradling a coffee, talking about running.

Then to round off what had already been a good day, I got to bake. For no reason at all except that I wanted to try something new. Probably was unnecessary because we already had cake and this week we have a smaller family group at home. I'm finding my need to bake is out-stripping my family's ability to eat. Ooops.

Saturday's cake was inspired by an amazing baker called Katherine Sabbath. She's on Instagram if you're interested in seeing just how amazing and creative she is. Mine is just a second-rate copy but I'm still pretty happy with how it turned out.

Thanks to Pinterest I'd finally found out how she makes those spiky pieces of chocolate that she uses to decorate her cakes. And they were too easy! 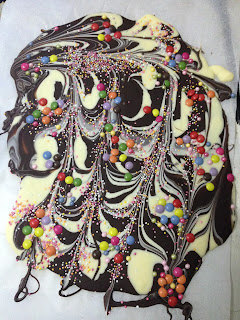 The finished product - before Ricky got to one of the sides and licked the icing off. 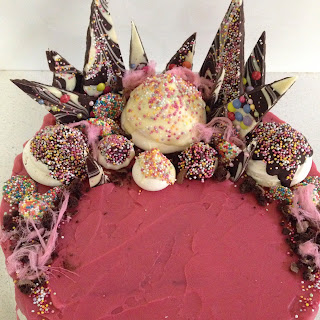