Can't Think Today - I Have The Dumbs

It's just a week since the marathon and already I'm bored.

It was okay while I was still away and had distractions. Like #1 son, Sam and his girlfriend Hannah. 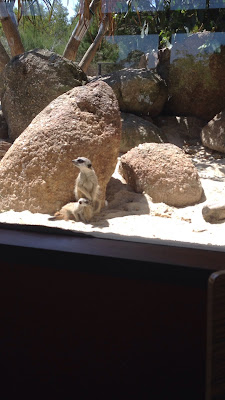 But eventually the fun had to be over and we had to return to the land of same-old-same-old without my endorphin fix to numb the boredom.

It is totally normal to get the blahs after a marathon. So of course the logical thing is to immediately enter other races. All week I've been tossing up ideas in my head and so far only have one firm definite. Maybe two. See! That's just an example of where my head's at. My firm definites are not that firm. They're like just-set jelly that could have done with a tablespoon more of gelatine.

So here's my maybe firm definite list thus far - Port Macquarie Half Marathon (on my birthday in March so I think that's a sign that I'm supposed to do it) and Melbourne Marathon in October.

I've got a whole list of other halves that I'd like to do but keep wondering how many is too many. I'd kinda like to try for a sub 1:40 half (seeing as I was less than 30 seconds away so that's only a bit over 1 second per kilometre faster and that should be doable shouldn't it?) so maybe less is more. But on the other hand most events are a weekend away and more mini-holidays aren't a bad thing - except for the bank balance.

I think what I'm really wanting is for someone to make the decisions for me cause my ability to make decisions is at an all-time low.

Take this cake, for example. 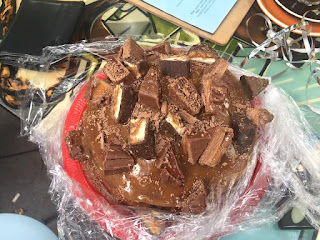 I decided, with the wisdom of many years of cake making and decorating experience, that it'd be fine to leave the dome on top. And then cover it with oozy caramel. And then put stuff all over the oozy caramel. This is after only recently making a cake which oozed everywhere. And then I was disappointed when all the stuff on the top oozed over the edge. I also decided that it'd be great to put raspberries in the chocolate mousse filling. With a caramel topping. And then I decided it was fine to give as a birthday cake because it was the recipient's fault for having a birthday just after my marathon when, patently, I wouldn't be at my sharpest mentally.

Yep, decision-making at its finest.

And this lack of ability to make a decision is creeping into other areas of my life - not just the fun running and baking ones. I want to start an online business selling my loud tights to other runners who, like me, enjoy a little colour in their lives. I know I can do all the sewing/manufacturing stuff and I have a good name (or I think it's good anyway) - it's just all the other stuff. Tech stuff. Money stuff. Registration stuff.

There's so much that I know that I don't know and it seems such an effort to try to wrap my head around. Maybe that's the post-marathon ennui. Or maybe it's that I'm 52 and it actually is harder to learn new stuff. I'm hoping that it's the former and that my ability to think clearly without being overwhelmed will return soon. Today would be good.

But even if it doesn't, I'll be back running this week. On my usual schedule. Just shorter and slower. So at least I'll be getting my endorphin fix.