Saturdays Are For Running And Cake

It was another doozy. Almost three hours of running. Just over 32k. And the weather's starting to get warmer so there was a lot of sweat!

The run had started well but about 14k in there was a bit of an emergency. One of those 'never trust a fart' emergencies. One of the challenges of starting runs at 4:00am, besides the whole waking up at a time that starts with a 3 and the running on only a few hours sleep aspects, is the fact that a lot of Brisbane's public toilets are locked overnight. And we, the good people of Brisbane, are not expected to require the use of said facilities until the oh, so reasonable hour of 6 am.

It wasn't quite 6am. And it was no longer dark so the bush/tree/lush foliage option seemed less attractive than it normally does. Luckily one of our group knew of a nearby convenience. And when it was locked, hammered on the window of the local coffee shop to get the key. Okay, hammered might be an exaggeration but tapping politely doesn't convey the urgency I was feeling at that particular moment and therefore my extreme gratitude. Ian, I have to thank you from the bottom of my .... not heart - something geographically south of there.

That's what running friends will do for you.

They will also remind you why you ever thought running a second marathon in a year was a sensible decision. By organising a 'we've finished marathon training' epicurean event (also known as a sugar binge) to a bakery whose photos on Facebook we've all been slavering over. Running for three hours means never having to say you're sorry to the occasional sugary treat. 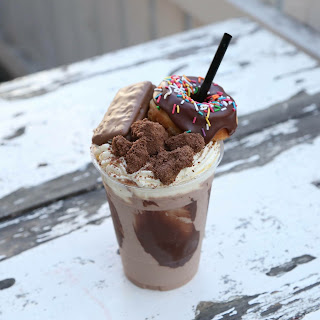 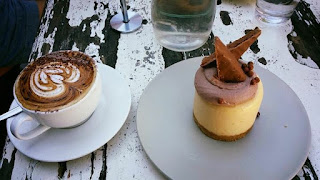 They look good, don't they?! I really tried hard but I just couldn't indulge for breakfast. I went with the eggs on toast option and after that there was no room for cake. Damn my small, pathetic stomach that has no staying power!

It was a really nice way to celebrate completing another big block of training. Hanging around, talking about running and dogs and events and food and Melbourne (where we'll be running the marathon in a couple of weeks) and New York (where some of the others will be running a marathon a few weeks after that).

I'm sure we looked like a bunch of hard-core athletes to all the other diners there. Tanned, lean, muscular, full of the joy of living life to its fullest - at least until the food hit our stomachs and the stupid, early start began to catch up to us. Someone yawned. Then someone else did. All of a sudden the party was winding up.

And the moment that we all got up and started to walk away from the bakery was when collective super-athlete image was shattered. There were low groans and there was hobbling. Not one of us (except for the one recovering from injury and the dog) could manage a walk that didn't look like it belonged in a nursing home.

For those who are wondering, I did eventually get my sugar hit. A little bit of cake decorating is what everyone does after a three hour run isn't it? And one cannot decorate cakes without a little sugar accidentally getting into one's mouth. And a little chocolate. Or a lot of chocolate if I'm going to be perfectly honest.

This is the first cake I've ever named. It's called 'Party - The Aftermath' 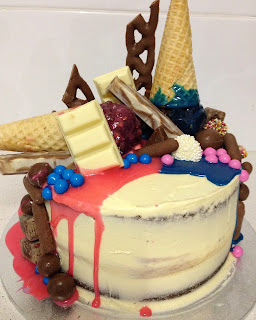 And that was how I spent my Saturday.