I want to thank each and every one of you who voiced an opinion on my last post. Having so many people say that I should do the 30k made the decision easy. Because I'm perverse I chose to do the 15k. Actually it was more than just perversion - it was a conviction that I was totally over doing stupid long races for the year. And some begging from a friend who wanted company. Pitiful begging. I'm a sucker for pitiful begging.

We totally lucked out on the weather Sunday morning. The forecast had been for possible showers. Wrong! It bucketed down for a lot of the race which was so much better than the other option of stinking hot and humid. And I did the one thing that runners should never do in a race - I wore gear that I'd never worn running before. The race singlet which was pretty, damned comfortable and a great fit. And my Run Amok tights - might as well start getting them seen out in the running community. 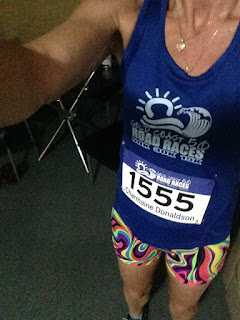 I lined up at the start line with no set plan except to run with Liz and Jess. And that was a loose plan. None of us had any set idea about pace so the consensus was run to how we were feeling. No pressure. Just enjoy. The race started and I just tagged along with Liz. The first k was a little obstructed - narrow path and slow runners starting right at the front - then the path merged onto the road and we could spread out and feel for a pace that was comfortably hard.

Comfortably hard ended up being just under 5 minute pace even though I'd sworn that I had no intention of running any kilometres starting with a four. Oops. I did worry that the decision to just go with it would come back to bite me on the bum later on but that was a momentary worry that I decided Future Char could deal with.

Kurrawa to Duranbah is such a fun event to run. It's a smallish (but growing in size) run with a lot of distance options in a great location. Possibly the only drawbacks are that it's a summer race and that there's a few hills. And I'm not talking about my usual 'ooh it's a slight positive gradient so it's a hill' type of hill. I'm talking about legit hills that kinda hurt runners that never train on hills unless they didn't realise that there was a hill on the route and they bitch and moan the whole time they're running it. Can you tell that I'm talking from personal experience? I'd looked to find an elevation graph of the run beforehand because I'd forgotten where the hills were and was really, truly and sincerely hoping that the hills all came after the 7.5k turnaround. Turns out that they didn't.

The nasty, bitey hill that I remembered from last year was actually at around the 5k mark. Luckily this will be the last year that it'll be included in the race and that will make the decision to run next year's race a no-brainer. My pace dropped from sub-5 to mid-5. Hate hills! Hate hills! Hate hills!! It took the rest of the kilometre and a lot of stern words in my brain to pick up the pace again. I think Liz hates hills too because it was about there that I started to pull away a little.

I got to the 7.5k turnaround and knew that I'd made the right decision about the distance. Only 7.5k more to go sounded like a great idea at that moment. Unfortunately there was still that hill to climb and I knew that there was a photographer right on the top waiting to capture potentially the worst running moment of my life. For the next couple of kilometres I plotted how I was going to fake my way to a photo that didn't look like someone needed to call the coroner then decided to leave it in the hands of the Gods.

The hill loomed in front of me and I felt momentarily overwhelmed. Already putting in a significant effort - would I have anything left in the tank to conquer it? Would I be reduced to walking? Would anyone care even if I did - probably not.

And then I was on it and climbing it. It was slow - not as slow as the girl who I passed but slower than the girl who passed me. A quick pained smile at the top for the sadistic photographer who probably has a dungeon wallpapered with the grimaces of agonised runners and filled with torture equipment that he spends his leisure hours in, and then it was down the steps with only 5k to go.

At this point I decided that I'd try to run sub-5s all the way home but unfortunately my legs didn't want to cooperate with my brain. They managed two kilometres before spitting the dummy and deciding that three kilometres more was three kilometres too far. Again the battle raged in my head. Speed up. Slow down. You can do it. No you can't, fool!

And then it was just one more kilometre to go. I pulled up my big girl panties and stopped the argument because I'd be running past all the tents and one must fake a good finish even if one is not feeling good. The last kilometre beeped at 4:55 but I still had 200m to go. Managed that at 4:21 pace so there's a lot to be said for the power of pride.

While we were waiting for Ian (the only one foolhardy brave enough to tackle the 50k), the organisers started the presentations and I was stoked to come away with this. This is the upside to getting old. 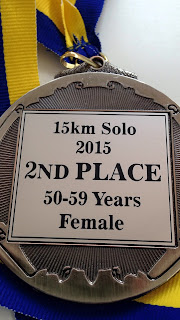 So racing in 2015 is now done! Time to ease back a bit before ramping up in the new year. And I'm pretty excited about what 2016 might bring.