A long while ago I signed up for a race this weekend.

I think it was a long while ago. Could have just been a short while ago but with everything that's been happening it just feels like a long while ago. I do like to give out fairly accurate information in my blog. Except in the case where a little truth-stretching makes for a better story. So in the interests of preserving my 97.8% honesty requirement I'll change that statement.

Some time ago I signed up for a race this weekend.

I signed up before Melbourne Marathon and I chose the shortest option (15k) because I wasn't sure how I'd be feeling. I trained for the middle option (30k) because 30k requires carb-loading and I kinda like carb-loading now I've learned to manage my pre-race jitters. And also because a lot of my friends are running the 30k and I like running with my friends.

My training has been fine. Sure I might have cut one of my mid-week runs short but it was stinking hot and on the scientifically-devised scale that exists only in my head a 13k run in 24C heat with a humidity over 88% is equal to a 16k anyway. So technically all the training is in bank.

But I sit here now in a quandary. I am in a state of indecision. Perplexed. Irresolute. Confused (although that's nothing new for me - you should see me trying to find my car in a shopping centre car park). Do I do the 15k or the 30?

The whole reason for signing up for this race was to run with friends. But I have friends in both of the distances so that criteria will be filled no matter which starting line I choose to toe.

It's not too late to make the swap. This race is pretty low-key and I can make the distance change as late as the morning of so this state of indecision could follow me for the rest of the week like that fart cloud that follows Ricky.

I was going to leave it up to the Weather Gods to choose. If the temperature was going to be stinking hot I'd stay with the 15. But the weather isn't looking too bad for this time of the year. That should mean that I definitely should change to the 30 and yet I'm still hesitant.

The reason that I'm hesitant is that the memory of last year's 30k is still quite vivid. And it's not a happy memory - despite how I'm looking in that photo. There's a lesson to younger people here - Facebook photos don't always tell the whole story. Someone might look like they're having fun when in fact they're dying inside. 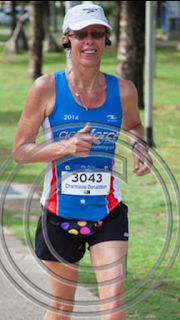 Sure I could say I want redemption for last year's horrendous 30k, which had a significant amount of walking in the last 10k, but honestly I don't. Couldn't care less about proving anything to anyone because I've proved enough to myself this year. And this run is just supposed to be about having fun with friends.

So what will I do? (All suggestions will be considered)
Posted by Char at 2:14 PM