Port Macquarie Half Marathon (Or How I Spent My 53rd Birthday)

It seemed like a good idea to run a half marathon on my 53rd birthday when I decided to enter a few months ago. A gift to myself. A weekend away with Iven and Ian. And by March the weather should be cooler, right?

And then race week came and all of a sudden it didn't seem like such a good idea any more. Eight hours drive there. Summer temperatures and humidity. Busy, busy, busy with work. Feeling really sick on Thursday and Friday. Running a half marathon was a really crappy idea. A stupid, stupid decision. Who'd ever want to do something like that on their birthday??

My head was all over the place on the drive to Port Macquarie on Friday. I could just pull out and enjoy a weekend away. I could try to change events. Maybe do just the 10k. Or even the 5k. Or I could start the half and pull out if I wasn't feeling it. It was a 3 lap course so if I pulled out I wouldn't have to walk very far. Too many options. And I had to make a decision at some stage. So I did - I decided that I'd defer the decision till the next day when we went to pick up our race kits.

Saturday morning I was starting to feel more like myself. So when we went to pick up our bibs I'd decided that I'd give the half a go. DNS-ing was still on the table as was DNF-ing. Decision made and I'd live with it. At least my brain could stop arguing with itself over the best option. And I got to spend the day carb-loading - so there was that positive.

Sunday morning hadn't dawned before my alarm went off at 4:45am. The race started at 7:00 NSW time but I'd stubbornly refused to put my watch forward. Ian and I were both ready by 5:40 for the short walk to the start line. We got there with 10 minutes to spare and sussed out the competition. 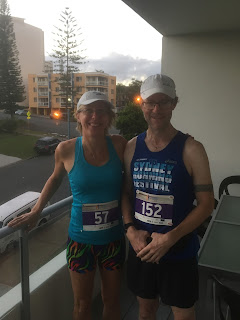 The half had the smallest field. Not quite 250. It was a relaxed, friendly atmosphere in the starting area. People just milling around - no need to jostle for position. A brief word from the race director, that really wasn't brief and that no one could hear clearly apart from when he asked if we could hear, a hunt for the hooter and then we were off.

I made a couple of mistakes in this race and the first was not having a clear plan for pacing. Because I'd been so ambivalent about the event I'd decided to wing it. Definitely not a great plan in a longer race. Running how I felt meant that I took it out a bit hard. 4:49 for my first k. 4:48 for the second and 4:46 for the third. I could keep that up for 18 more kilometres couldn't I? My competitive brain said yes and stop thinking so much. My rational brain said slow down - it's hot and a couple of days ago you weren't well so don't be too ambitious. My rational brain won that little debate and my pace slowed. But only marginally - 4:51, 4:51,4:51, 4:55. First lap was done. Only two to go.

At the start line I'd guessed at who I was racing. And one of those ladies had passed me in the first lap. Second lap I started to reel her in a bit. And by the first turn around on that lap I'd passed her. I hadn't seen any other elderly female runners up ahead so I guessed that I might be #1 in my category. All I had to do was hold on for another 11k. Ughh! It was getting hotter by the minute and there wasn't much shade on the course. Had a couple of snakes for fuel - but had them a couple of kilometres late and got left with sticky hands. Used my next water stop water to wash my hands and only had a little sip left to hydrate. Silly, silly silly. Stop thinking. Keep running. 4:51, 4:58, 4:58, 4:53, 4:53, 4:58, 5:07.

Second lap done and so was I. It was hot. It hurt. I wasn't having fun. And I didn't even have any music in my head. I think it was being drowned out with all the negative chatter happening up there. 2k up to the turnaround - 5:06, 5:07. Still ahead of my nemesis. 2k back down to the starting area - 5:05, 5:18. Only three k to go but that three k seemed like an awfully long way. The naysayers in my head kept telling me to walk. And I told myself that I could but only if my nemesis passed me. But until then I had to keep running. 5:08.

Just two kilometres. Anyone can run two kilometres. I can run two kilometres. Except that I don't really want to. The water stop was coming up and I did something that I haven't done in a very long time. I stopped. And walked. And drank an entire cup of water. It tasted sooooo good. That's when I realised that I was probably really dehydrated and those goosebumps I'd had a couple of times in the last few kilometres might not just be because of the sea breeze. I ran to the turnaround and then walked through the water stop again. 5:40. Who cares. It's my birthday and I'm 53 and if I want to walk through a water stop twice then I'm going to.

The last kilometre was spent reassuring myself that it wasn't failure to have walked just a little. I needed to redefine my idea of success. Running a half marathon at 53 is success. Running it without pooping or wetting yourself at 53 - incredible success. Without vomiting - success beyond my wildest dreams. Hell, getting out of bed some days is success. So walking a little bit is no big deal.

My time wasn't even that bad - considering that I'd walked a little. 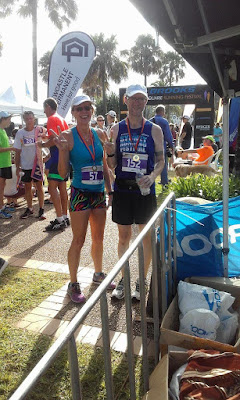 Ian had also run a great time 1:38:something. He'd died a little in the back end and we decided that it was the heat. 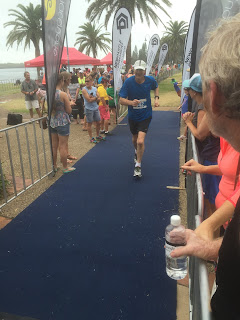 A pretty successful day out. And success like that needs to be celebrated. With ice cream. For breakfast. My birthday, my rules, don't judge. 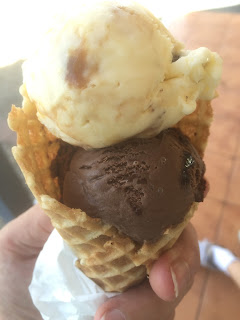 I found out on the long eight hour drive home that it really had been a pretty successful day. I'd won my age group. And, for the first time ever, I'll be getting prize money. $65 which, after the entry fee is taken out, will leave me with $5. Not enough to give up my day job but I'm not complaining.
Posted by Char at 3:42 PM