The Results Are In

I've been to the doctor's twice this week. First time was to get my results back from last week's tests. And I got zilch - normal, normal and more normal. There was a little reduction in my serum protein levels which means that my immune system is working hard. So with nothing much to work with, I doctor scheduled me for an exercise stress test and an appointment with the dietitian.

First off this morning I headed in to see the dietitian. She asked lots of questions and I was honest (I even admitted to the weekly fish and chips/burger while watching Biggest Loser and the nightly cookie with a cup of tea). Apparently I'm doing a pretty good job getting the balance right.

Enough calcium - tick
Enough carbs - tick
Enough protein - tick
Enough vegies - tick
Maybe another piece of fruit to make two instead of one
Definitely more fluids - 2 litres is the base level and I should be having more on my heavy sweating days.
More salt to stop me from peeing out the extra water that I'm drinking.
Taking in my carbs on the long run a little earlier on - at maybe 45 mins instead of an hour.

I learnt that we only have enough stored carbs in our body to last 2 hours - and that's when our stores are maximal. This rarely happens for people who are training except if they've done a proper taper and carb load so taking in some nutrition while we're on a long run is absolutely necessary.

After the dietitian, it was off to the treadmill for the test. Sam had given me the low-down on what would happen and I knew it wasn't going to be fun. What I didn't realise is that I need practice if I'm going to run on a treadmill ever again. Wow, did I feel gumby! My feet kept scraping the tread and I was having trouble even walking at an even pace. I pulled the pin after 18 mins because I didn't have anything to prove and I didn't want to go to the next level. Yep - call me chicken! They had enough information to tell me that I'm normal - which is what I expected to hear but doesn't give me any answers.

The doctor has conceded that it probably still is Overtraining Syndrome and has given me a supplement, Coenzyme Q10, that has been proven to work both in Overtraining Syndrome and in Chronic Fatigue. It's also been used in endurance athletes with really good results. The pharmacist told me it would take a month or so to work. It is necessary at the cellular level in the mitochondria to help in the production of energy (seriously, don't I sound like a science geek?). We usually produce it ourselves but don't produce as much as we age and can't get it in our diets, ergo the supplementation.

So I have a plan - to take my sessions at a moderate pace until I start picking up, to take my supplement and to implement the dietary changes recommended. I feel like I'm heading on the right track.

(Actually I wasn't TOTALLY honest with the dietitian. I didn't tell her about licking the beaters when I cook or having a little taste of the cake batter which I really had to do because I had changed the recipe for Josh's birthday cake a little. But I sent the cake off with him to work so I won't actually eat any of it and we all know that it's the cooked cake that has the calories - not the batter) 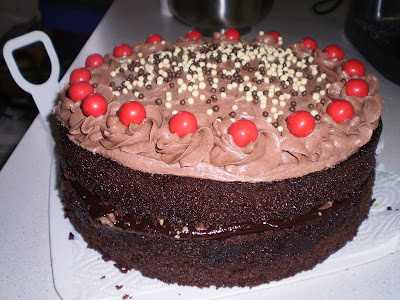