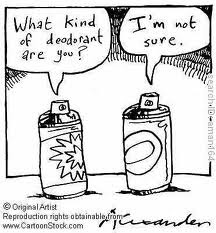 I'm typing one-eyed today. My right eye is really blurry and it was the stupidest thing that caused it.

Yesterday evening I showered. And after I showered I sprayed my pits with deodorant and put on my pyjamas. I had a new pyjama top on and when I looked at it in the mirror to admire it's pretty purple colour I saw that it had clumps of deodorant on it. So of course I had to try and get it looking clean again. I flicked at the clumps and managed to flick one into my eye. It was a bit gritty and very resistant to removal but an hour later I had gotten rid of it but not before my eye had gone red. And when I woke up today it was blurry so I think I've scratched the cornea a little. I'm sure it will be fine tomorrow.

Anyway it got me wondering about eye deodorant and its potential. My deodorant is an antiperspirant so it's supposed to stop wetness. How great would it be to be able to spray on some eye deodorant before seeing a sad movie ... or at a funeral? There'd be a few problems that would have to be sorted before this product could be marketed - things like stinging and blurred vision. But I could be on to a winner!!?

And speaking about winners - I felt like one yesterday after my long run. Heaven knows it wasn't fast and the last 4 k were REALLY hard but I finished a 24k run!! That's my longest in such a long time. I've been stuck on 16s for a while and I decided that it was time to challenge myself a little. And the best news is that today I'm feeling really good. Not exhausted. Like I could go for a run.
Posted by Char at 7:11 PM