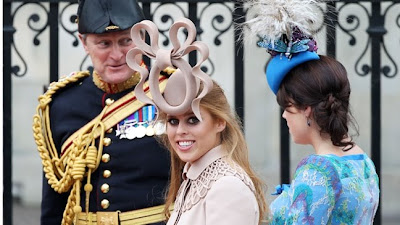 Don't need to say anything about this one, do I?! The look on the man's face pretty much says what we're all thinking.

Now that I've finished ridiculing the royal fashion sense, I'll get on to the real reason I'm here today. The Rockettes have been renamed. After the events of yesterday, they will henceforth be known as Babs and Ginger (of Chicken Run fame).

Yesterday I forgot to collect the eggs. Actually I didn't really forget but it was raining and I'd blow-dried my hair so I sent Iven down to collect them. (Iven never minds getting his hair wet - probably because he doesn't have as much as he used to.) It's usually a two minute job to go down into the backyard, get the eggs, tell the girls that they've done a great job then get back into the house. Iven was down there for a lot longer than two minutes and I heard a lot of rustling through the foliage before he came back ten minutes later to tell me that our beautiful, plump, egg-laying machines had gone!! And they weren't the only ones missing. Bubbles, the foxy, had also vanished.

Our side gate was open so I immediately jumped to the obvious conclusion - they'd all been stolen. I was thinking maybe a group from a chicken-and-dog-eating nation had conducted a raid to supply their Saturday night dinner. But I had to mentally apologise for my thoughts when I found out that Sam had left the gate open and Bubbles had just taken herself off for a little walk around the next-door school. And a little while later we found that the chooks had done the same thing. Maybe they were worried that Masterchef was starting up on TV and I'd be tempted to try one of the chicken recipes. But I don't know why they'd worry - I've told them that they're safe as long as we get two eggs every day.

I found out yesterday that running is a lot like childbirth - it can hurt so much but the memory of the pain fades quickly and we line up to do it all over again. Yesterday we were sent on the same run that I'd done the previous week. All I could remember was that it was generally pretty hilly and that I'd loved hearing all the birds in the bush. I did remember one nasty hill that I'd walked up but I certainly didn't remember all the other ones that seemed so much harder (probably because I'd spent the week coughing and doing absolutely no running) I could have turned around with some of the group and done a 12k or even a 16k run but NO. Stupid me decides that I'd only had a little cold and I could do the full 26k. It turns out that I was wrong but it wasn't my lungs that held me back. My stupid ITB decided that it didn't like all those hills and the camber of the road and started to protest. So the final result was 23.5k of running, 2.5 k of walking (mostly up the hills because my knees were not feeling the love) I will have to visit my Physio/friend Chris this week and get her to caress me with her fingers of immense pain.
Posted by Char at 7:25 PM