More strange goings-on in the Donaldson household this week. Bubbles, our little fox terrier cross, has been disappearing for chunks of time and reappearing with a very large belly. I know she can't be pregnant because I have her ovaries and uterus in a bottle in our medicine cupboard (And no, that's not weird or sick. Doesn't everybody do that?) She's obviously been getting food from some place - but we just couldn't work out where.

It took a bit of clever sleuthing on Iven-just-call-me-Sherlock's behalf. He was suspicious that she was getting into our compost heap. So yesterday he made sure that Bubbles got to see some mighty delicious food going into the compost bin in the kitchen and then see it get thrown onto the heap. Our compost heap is open but it's in the chicken run which is fully fenced off. 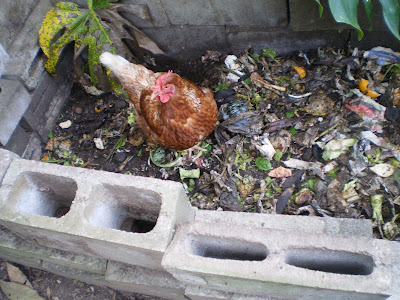 Iven made a great show of going back inside and Bubbles followed him in but we could tell that she was distracted. The moment that Iven settled down to read the paper she quietly snuck outside. Of course Iven wasn't really reading the paper. He hadn't gone quite so far as to cut a peep hole in it but I think he would have if I'd suggested it. He tailed her out, being careful not to get sprung by this deviously greedy canine and watched her do a reverse-escape. It involved a lot of squeezing and burrowing but she finally made it in. And her reward? Week old rice and chicken soup (Again - not weird or sick to give our chickens chicken soup) 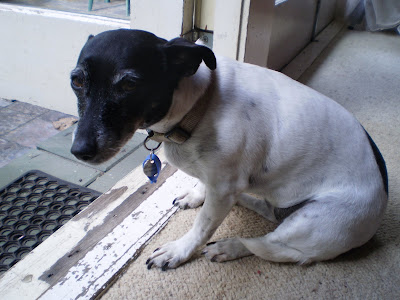 How guilty does she look?

Iven's got a bit of Bubble-proofing to do this weekend now even though I told him this problem will be self-limiting. Once she gets fat enough she won't be able to squeeze under fences anymore.
Posted by Char at 6:12 PM