I think the insanity is starting to settle. I've finally wrapped my head around what still has to be done and we're down to going back to the GP early next week to remove stitches and staples then back to the hand surgeon for either a new cast OR an operation. He's left the decision to us. If Josh has the operation he probably will have full mobility but there is the chance of infection, fibrosis and more scarring. And he won't really start to recover until it's done. If he takes the more conservative route, he may lose about 5% of the joint mobility and there may be a chance of non-union because it's close to his previous plate. But this chance is low and the reduced mobility is really only an issue if he decides to take up the violin professionally or become a jeweller. And his healing has already started. Honestly, the conservative route seems more attractive. 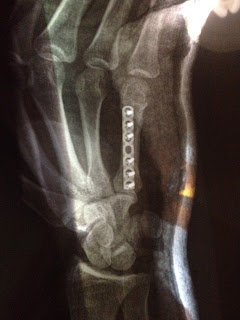 He's doing really well, all things considered. He had a bit of a low day yesterday - boredom and frustration was biting. He's been here before with his hand last year but that was just one hand. Having both slightly incapacitated is a whole different ball game. Dressing is slow and tedious. Using the computer, slow and tedious. Eating and drinking, slow and tedious. Showering, impossible unless you have help. So you can understand why he's frustrated.

I've earned my 'Good Mummy' badge this week. You get that when you have to wash your 23 year old son for the first time in maybe 20 years. I'm actually not sure when I last bathed him but he's definitely grown a little since then. And helping him shave was a new experience. I'm eternally grateful that I didn't cut him - the boy's got enough little cuts.

But I did manage a MAJOR FAIL the day after the accident. Seriously!! Who would make spaghetti bolognaise for someone who has no good hands to wield cutlery? I only realised it was an incredibly stupid choice when I was dishing it out. So I channelled my 'good mummy' and cut it up into manageable bits that would sit nicely on a fork or spoon. And I left the knife and fork on that plate so I knew it was his. Unfortunately Iven thought I'd left it for him and he proceeded to eat it. So I had to rouse on him  and he cut up another of the dinner's that I'd dished out. (My family all eat at different hours depending on work shifts, soccer training and uni hours.)

Toby has been keeping everyone sane. How can you be sad, frustrated or lonely when you have a puppy around? His antics just make us laugh. He spent last night sitting on my lap on the couch (shh, don't tell Iven) sharing jellybeans. My justification was that he'd had a needle that day and everyone who has a needle should have at least one jellybean. And he'd been so incredibly brave about the needle that he deserved as many jellybeans as he wanted. He wanted the whole packet but there's just some colours that he doesn't like so he gave those ones to me. And luckily they just happened to be the colours that I like the best. What a team! 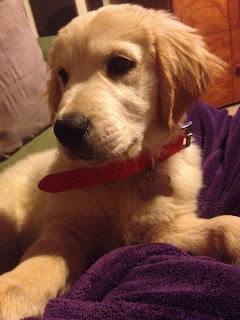 Thank you everyone for your care and concern over the past week. It means a lot!
Posted by Char at 1:36 AM