Only For the Foolhardy

Men have historically always been the adventurers. The explorers. The ones who've gone out to look for new lands and riches and power. It seems to be coded into their DNA to take risks for the sake of glory. Well it seems that one of my boys has that dare-all spirit and it wasn't the boy I was expecting it to be.

My first-born son Sam went to a friend's birthday party the other day. Sam is almost 25 so it wasn't a
McDonald's party. Or a bowling party. Or even a laser tag party. And he hasn't been to a fairies and superheroes party in years (and it's just as well because our Captain Planet outfit would be way too small). No, this party was definitely a more adult party but not in the way you're probably thinking. The birthday boy, Sam and a group of intrepid (some would say foolhardy) young men went for a drive out to Wellington Point to a little cafe to try a food challenge. And the reward was to have your name listed on a board for time immemorial.

The cafe is the 'Off The Wall Diner' which claims to have the world's hottest burger. Quite frankly, if I saw 'Megadeath Burger' written on a menu, it probably wouldn't be the first thing that I'd choose. It doesn't exactly scream PICK ME. And when you  are given a waver to sign that mentions death, that's probably a sign to give the burger a bit of a swerve. Advice from the waitress about buying wet wipes and refrigerating them to take to the toilet the next day would be another reason to dissuade me. And being forced to wear gloves to eat the burger - well, if your hands shouldn't touch it, why would you let it into your body?? 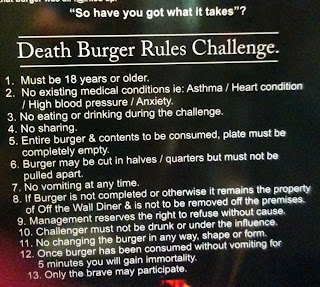 Not everyone in the group participated. But the majority of them ordered these little beauties. 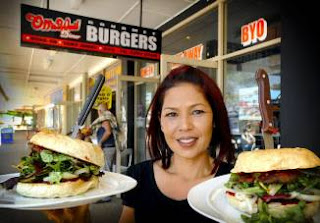 There were layers of chilli sauce, slices of chilli and lots of raw onion. Sam managed a third and wasn't the first to give up. Go Sammy! But only one boy out of the eleven managed to actually eat everything on his plate. He was shaking and sweating by the time he finished. And he had to keep the burger down for five full minutes before his feat was formally recognised. And as soon as that five minutes had elapsed he took off like a bat out of hell to the pub over the road to use their facilities. I can't imagine that it would have been any better coming up than it was going down.

Sam felt a bit crook when he came home. And today I noticed this on the top of the stairs so I'm wondering exactly how things panned out. 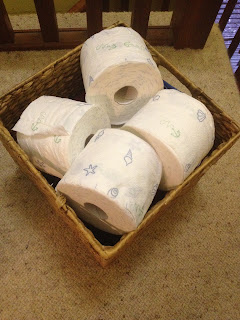 One thing's for sure - you'll never catch me eating one of them.