I was back at the acupuncturist yesterday. I've been going once a week for the past 6 weeks and I'm positive that it's made a difference - my improvements have all been in the past six weeks. My acupuncturist, Hae Uk, is a lovely gentle lady who just gives you this sense of peace and calm and caring as soon as you walk through her doors.

Yesterday she announced that I'd made enough improvement now to see her only once a fortnight. And I'm a little sad that I won't be seeing her next week. After all, who will ask me how my week's been? And who will ask if my bowels are regular? And how my flatulence has been? And my stress levels? She even cares if my toes and fingers are cold.

Yesterday she asked about my hip/upper hamstring that I'd injured last year. She'd tried some acupuncture on it earlier but it continues to niggle me. So she decided to do some cupping. Another first for me and it was a very unusual sensation. She put about 6 cups on my buttocks and hips. She uses Korean cups which are gentler and have more control than the heat cups. It was kind of like being attacked by six high powered vacuums. I felt great lumps of my pale flesh being sucked up into each of the cups. It wasn't painful - just weird. And for a while my backside felt tight and firm but then she let the suction out and my new-found perkiness vanished. Pity.

That afternoon I decided to take my suctioned posterior for a run. I'd normally run in the morning BUT it had been pouring, it was cold, my bed was warm and I'd been up in the middle of the night wrestling Toby out of our bedroom after a call of nature (mine, not his). What had all seemed too hard at 5:20am was kind of inviting at 3:30pm. All my work was up-to-date and the day was cool so there was really nothing to stop me.

I went on a route that I haven't tackled for 6 months. It's one of my favourite routes out along a golf course and through the university but it's kind of hilly (which Coach Chris would dispute because he has a weird and distorted view of hills - he likes them). What an amazing run I had!! I just felt so good. I could attack the hills and not die at the top. I didn't have to walk and the second half of the run was faster than the first. And my injury behaved itself quite nicely thank you. It was 11k of heaven. And I came home full of endorphins. You just don't get a rush like that from plodding along - it's something that only running hard gives you.

I was so pumped that I totally ignored my need to stretch and finished a cupcake decorating project that I'd started before I left. Thank you Pinterest for all the amazing ideas. This icing technique just requires some gel colours that you squirt into a disposable bag before piping onto the cake. Each cake ended up slightly different depending on how much of the colour was pushed through. My hands ended up fluoro pink and Josh's teeth ended up a weird purplish colour - but it was nothing a bit of brushing couldn't get out. 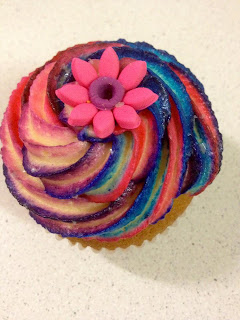 By the time the cupcakes were done I was cold and starting to stiffen up. Did I mention that it had rained on the run and I was sodden and it's winter? The only dry thing I had on was my really cute red and white spotted apron (don't laugh - I'm sure you've all decorated cupcakes while wearing wet running gear and a frilly apron) and it wasn't exactly warm. I will never claim that I always act sensibly.