When do you know that you're really on the mend after being unwell for a long time? For me it's been a lot about how I'm running - or more importantly, how I'm recovering after a run. But it's also been about how I've been feeling about things. How much passion do I have for the things that I love to do and do I have the energy to be excited about doing them.

Honestly, a lot of this year I've just been going through the motions. When I was in my quiet times last year it was all about creating pretty and yummy cupcakes. Inventing combinations of fillings and cake and dedicating them to clichés. - The Mother-in-Law's Tongue, The Road Rage, The Heart of Gold. It was so much fun. And even though I've been baking a lot this year it's really only been to fill our cake tins and provide birthday cakes for my peeps.

But I feel like I've turned a corner recently. All of a sudden I'm wanting to try new recipes again. To learn different decorating techniques. I have a list of things that I want to do and I'm just waiting for my cake tins to empty a little before I fire up the electric mixer again.

And this passion to bake has made me so excited about my latest purchases. Actually the first wasn't so much a purchase as the result of a little international bartering - a couple of ice-skating leotards for a couple of the cutest aprons I've ever seen. Thanks Marcia! I love them. 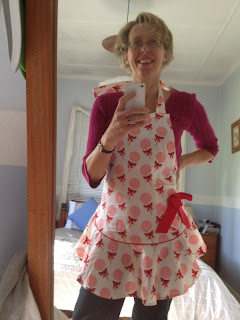 And now I've got my hands on these cute aprons I'm going to make some more. Apples and cupcakes scream kitchen to me. 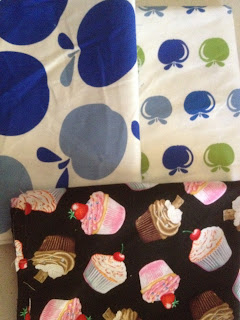 And I've been on-line shopping. All those pretty colours are for a project that I found on Pinterest where you end up with multi colour swirls through your icing. The yellow spoon things are for measuring out cupcake batter and the plastic moulds are for shaping icing flowers. Now I'm wishing that I had no work at all and I could just bake. 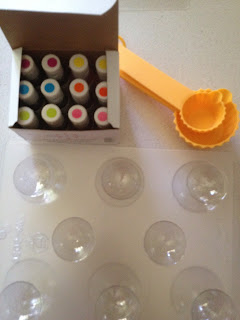 Toby is continuing to delight me every day. He's been so easy to fall in love with. I know I've been very quick to boast about his high IQ but something happened the other day to make me doubt it for a moment.

Toby loves sticks. He loves to chase them. He loves to chew on them. He loves to carry them around proudly like a trophy. The other day I was working in my sewing room when he came racing in with a stick that he was very keen on showing me. It was a cold day and I'd only slid open the door about a foot. Toby's stick was a foot and a half long. He hit the door and the frame at a very high speed only to be stopped dead in his tracks and bounced backwards and his magnificent stick broke into bits. The look on his face was puzzled bemusement. The door was open so why couldn't he get in? He tried again - a little more gingerly this time - and was thrilled to finally show me his new (modified) toy.

But apart from that he's only shown one really negative trait. The boy is incredibly greedy!! He will sell his soul for food. He carries his food bowl around the house to remind you that it's empty. Those eyes are pretty hard to resist. 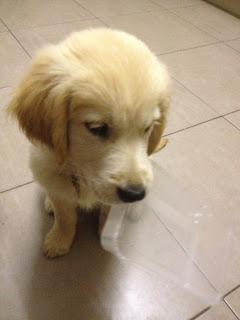 But I swear if you leave any food on the coffee table he'll totally make sure it doesn't disappear (and if it does we'll probably be able to guess the culprit). 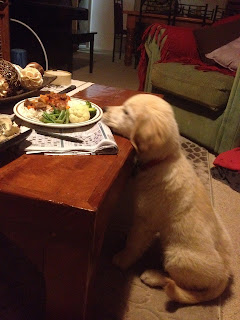