Our lives have been turned upside down by a little ball of fluff that's joined our family. Toby seems to be growing before our eyes and learning so many new things.

Things we're quite a long way from conquering - Toilet training.

Actually that's not totally true. He knows where the human toilet is and likes to pee just outside it on the carpet - preferably when I'm on it and can't do anything. But if I was a seven week old puppy I think I'd have trouble working out the difference between carpet and grass too. 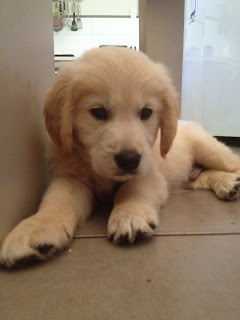 Another thing that he's learnt is that the kitchen is an amazing source of spills that taste pretty good. Bits of cupcake mixture or cookie dough sometimes come flying out of the mixer when I forget to turn it down low. The tiles can sometimes be a puppy smorgasbord. 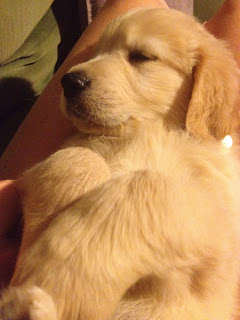 Do Those Paws Look Big to You Too? 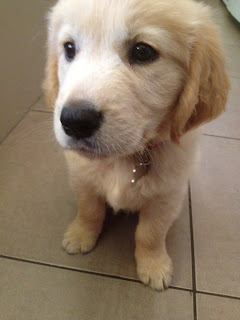 Sit - Sure I Will If There's Food Involved 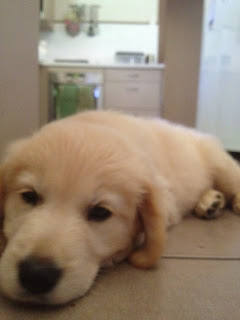 Toby's not the only baby who's needed attention this week. My youngest human baby did something that he hasn't done in years. He yelled for me to come help him in the toilet. He used to do that all the time - he'd need help getting up, wiping his bottom, getting down, flushing. The whole toilet thing was a two-person deal when you're two and a half. But Luke is 18 now and I'm a little reluctant to try and wrestle his 6 foot 3 inch body on or off our loo. And I'm even more reluctant to wipe that less-than-cute butt of his.

Luckily he didn't want me to either. But unluckily, the toilet had done what it's becoming world-famous for - it had blocked up. Oh yay! Lucky me!! (When is someone going to invent that Sarcastica font??)

This was the second time that it had blocked up this week. The first was at 4:55 am on Tuesday morning. And I was the culprit. And I left Iven unblocking it. And when I finished at running I went to the shop and bought a plunger. It was fun walking around the shopping centre knowing that everyone who saw me could probably guess the state of my toilet.

Luke had tried to unblock it but had chosen the piece of wire as his weapon and all he'd managed to do was hook 'the one that should have gotten away'. That's when he yelled for help. Enter Supermum. I unhooked yesterday's digested dinner and used the toilet brush  to do the rest. And, voila, we had a functioning toilet again. I've now added a new talent to my list.

Iven has gone out and bought us a new throne and the plumber is coming on Tuesday. And I bags being the first to use it!