Twelve weeks ago I took my first few running steps after an eight week lay off. That first run was tough - 500m walk, 500m run for 10 kilometres. I overshot my first 500m run because I wanted to hear the end of the story and actually ran 700m and I remember thinking that I couldn't imagine being able to even run a whole kilometre again. Thinking that I would do anything just to be able to run - didn't matter how slow.

Well twelve weeks later I'm running a whole kilometre comfortably. Running more than one kilometre. Running 15k in one session and almost 40 in a week. And now running slow isn't not quite enough any more.

Tuesday's speed session really brought back the desire for speed. I did my usual 3k loop before meeting up with the group and then set about doing a couple of 1k reps. The first rep I kept at a solid, steady 5:20 and it felt easy-ish. I rested till my heart rate dropped then I set out on my second and put a little more oomph into it - 5:05. I had enough time for a third. I didn't feel like I was pushing any harder but when I stopped my watch the number had a 4 in the front. 4:53! I know it's not earth shattering. And I know it'll never get me to the Olympics. But that's where I want to be running. And maybe even a little faster.

I talked to Coach Chris today about coming back onto a program and he was the voice of reason to calm my impatience. We've decided that it'll happen after Gold Coast in early July. And I'll keep doing the speed sessions my way until then. But I'm excited that it's finally going to happen.

I've discovered that my beautiful and supremely intelligent puppy is shallow. I made this discovery when we went for a little walk to his cousin's house yesterday. The walk really is little - just over one and a half kilometres. But it took us about 40 minutes to walk it because, as bright as Toby is, he suffers from puppy ADD.

The shallowness is, however, unrelated to the ADD. We had only walked ten metres from our front drive when Toby grabbed the lead, pulled backwards and refused to go any further. He's a little timid around cars but the street was totally empty ... except for our 'special' neighbour. The one who complains about basketball noise, about trumpet practice, about not being able to see that we're not home because we installed a garage door. Mrs W was on the foot path doing a little bit of weeding, bent over with her not insubstantial posterior pointing in our direction. And Toby was scared. And not without reason ... 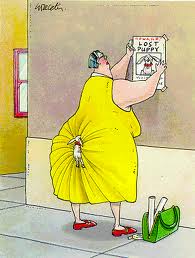 This event in itself was not proof of his shallowness. That come about a kilometre (and half an hour later). We were trudging slowly along, stopping to sniff at random tussocks of grass and interestingly, aromatic tree trunks when a very attractive young girl with long legs, an athletic posterior and a bouncy pony tail went trotting by us (and for the information of the male members of our squad - I did not give her Chris's business card or invite her along to any of the sessions). Toby took after her like a dog possessed. It's just as well he had an anchor at the end of his lead or he might be sleeping in someone else's house tonight.

And here I was thinking that he'd fallen for me as heavily as I have for him. I think he just loves me for my cupcakes. 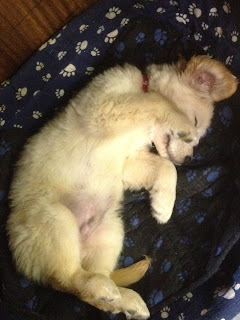