I chose not to run on Saturday. It's always a hard decision to make but I know it was the right one. I just can't mess around with my health and pushing it too hard now will have serious consequences. But boy it's hard to say no when your head's saying do it.

I've been thinking of all those ads and motivational sayings that urge us to be more than we think we can be - 'Just Do It', 'Life Without Limits', 'Be All That You Can Be'. I've always been inspired by these but lately I've been wondering what if this IS all I can be. If I 'just do it' will I end up sick and exhausted for months? Maybe my life does have limits. I'm not actually doing this in a negative way - more contemplative. And maybe it's okay to accept those limits without feeling like I've copped out. I don't have to run ultramarathons or even marathons to be a runner. I am a runner no matter if my weekly total is only small.

And it's not that I've given up hope that I'll recover and one day run strong and long again. There are still some running things that I'd love to do. I do think this latest set-back is only small and will take a week of being judicious to have me back on track again. I may have missed yesterday's run but I ran today - just 7k and very, very comfortably. I even walked up the big hill and I'm not ashamed. My aim was to keep my heart rate down and I succeeded.

I have my first race of this year coming up in two weeks. It's the Gold Coast 10k and I will run my slowest ever time but I will be proud that I've been able to finish it despite all that's happened this year. It may be a PW but it's not going to be quite as slow a PW as I was expecting so that's almost a PR isn't it?

Enough of the confused Sunday evening rambling - I have another Toby story to share.

Toby is teething. He chews on everything but mostly sticks and bark from our garden. And he likes to chew those sticks and bark in our lounge room on the carpet. Talk about a mess. So yesterday I decided to give him a pig's ear instead. Mmmm pig's ear! He loves them like Homer loves doughnuts. He carried that pig's ear outside so proudly and spent ages gnawing away on it.

Then he decided that is was warmer in the house so he carried it back into the lounge room and lay under my seat. If you've ever smelt one of those pig's ears you'll know just how nasty it smells - a little like a piggery on a hot summer's day (yes, I've been in one and know exactly how rank it smells). I could only stand it for five minutes before I was encouraging him outside again. And he was pretty obedient. He trotted outside again but this time he was only out there for a short while before he was back in - this time without his stinky treat. 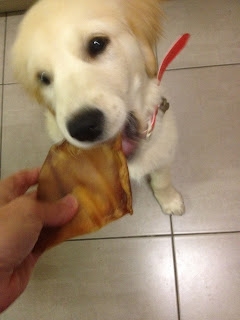 Later that evening I sent both dogs out to go to the toilet before we shut up for the night. Toby did what he had to and then continued to sniff the ground, following some mystery scent. I thought he was finding a place to go #2 but no - he ended up at the old cubby house where he stuck his head in a hole in the wall, rummaged around for a while, then triumphantly pulled out his half-chewed pig's ear. He'd hidden it away for a midnight snack. Amazing how early those doggy instincts kick in.

And finally - Toby's latest trick. I must apologise for my lack of skills - who knew that the camera didn't just readjust when I turned it on it's side? Obviously not me. If anyone ends up with a neck spasm from watching it, Sam recommends two ibuprofen and a heat pack :)