I'm talking about my blog - not my life. The scary little message threatening doom and disaster if you should click on my blog has gone and I did it all by myself because I'm a techno-genius! Actually I'm so technically inept that I read what I should do and almost wept because I didn't even understand half of the words. But somehow I worked out what to do so if you choose to read my blog your computer won't implode or explode.

The life stuff isn't fixed but this week has been way better. And I'm taking each good day with gratitude.

Today was particularly good. And by good I mean productive. Even though it started with a cancelled massage (boo), I managed to keep my composure and make the most of my extra time. My cleaning lady couldn't come this week. Or last week. And she's off on holidays for the next two weeks. So I started the day by giving two rooms the once-over.

I know you're probably shocked that I have a cleaning lady - me being a total domestic goddess. Yes, I cook and sew and even iron when the mood takes me, but cleaning is one of those thankless chores that gets undone as quickly as you do it. I figured out early in our marriage that if I was rearing children, cooking and running a business I shouldn't have to clean as well. And for a bit of money every week my marriage would stay intact and no one would have to die a horrible death because they'd spilt milk on the kitchen floor. I don't cry over spilt milk - crying's not violent enough.

Cleaning was followed by a long session on the phone making appointments to all the places that I'd been putting off - dentist, veterinarian and fart doctor. The dentist is just my annual check-up and clean. The vet will be removing a couple of dangly things from between Toby's legs. I still have Nelson's testicles in a bottle in the medicine cupboard - maybe it's time to get rid of them and I would if I could think of a good form of disposal. I don't want to bury them in the yard because Toby might dig them up (and, God-forbid, eat them). Throwing them in the bin just seems gross and putting them down the waste disposal unit is a little disrespectful when you live in a houseful of males - but it can keep a wayward husband toeing the line.

The fart doctor should be interesting. Of course he's booked out until November - there must be lots of other people who produce more than their fair share of flatulence. My GP has promised me lots of special treats with him. How does a colonoscopy sound? And a gastroscopy? Hopefully if they use the same scope they'll do the top before the bottom. I was actually just hoping for dietary advice when I brought the subject up at my last visit.


Appointments all made, it was time to put on the Minnie Mouse apron and crank up the cake mixer and the oven. And the music. Last week's chocolate extravaganza was just a precursor to the main event. 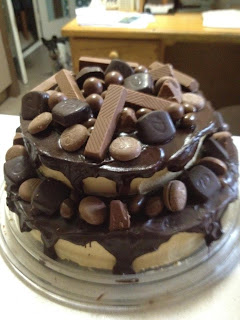 This little baby took me most of the afternoon to make - time well spent if you ask me. And I've made it for absolutely no reason except to see if I could. If you look in the background of the pic you can see Bubbles plotting how she will get her share. She keeps forgetting the chocolate's not good for dogs.

Lastly I wanted to mention yesterday's run just to prove how entirely hard-core I am. When I woke up at 5am I felt fine - just went through my pre-run ritual of eating a banana and having some beetroot juice. It had the effect I was hoping for but, unusually, my stomach just didn't feel happy after the toilet visit. But I did what any runner would do - ignored it and walked up the hill.

I started running once I reached the top and managed a whole 200m before the banana and juice decided to make a re-appearance. Gross! The beetroot juice tastes even worse coming up than it does going down and it looked like I had had a stomach haemorrhage. I turned around to walk back home but realised that I felt heaps better and I really didn't want to miss a run so I did another about-face. Almost an hour later I got home with 10 and a bit kilometres under my belt. There's nothing weird about doing that is there?