Navel Gazing on the Run

Today's post was going to be some gratuitous bragging about how well my running has been going and how awesome I am. BUT I'm just home from a really tough speed session that reminded me not to get too far ahead of myself so the bragging will be somewhat tempered.

Let's start with Thursday's run. I can't talk about Thursday's run without feeling a little boastful. I managed a fourteen kilometre run with not one but FOUR toilet breaks. It was less a run than a tour of the local public loos. I'm not exactly sure why things got so bad. It started off well.

I'd forgone my morning run for some well needed sleep (eldest son playing in a soccer preliminary finals match on Wednesday night that went to overtime = a very late night for this old duck). I endured a day of guilt before hitting the road at about 4:30pm AFTER going to the toilet and knowing I'd be fine in that department. I only made it to the third kilometre before I felt the urge and being a big believer in the wisdom of Billy Connelly ("never trust a fart") I decided to duck into the nearby toilet.

Job done and I was off again. This time I made it all the way to kilometre #8 before deciding to err on the side of caution. I love conveniently placed public toilets! Back on the road I was convinced that I would be fine now - as I had been after the first pit stop - and I was feeling pretty good so I decided to tack on an extra loop to my normal run. I only made three more kilometres before having to visit the Anzac Park facilities. And then it was only one kilometre more until I was sweating and cursing at the lights, desperately hoping that they'd change in time. My last toilet visit was at the local shopping centre and I will be eternally grateful that it was late night shopping and the centre was still open.

Poor Iven was a little worried by the time I got home. I'd told him I'd be a bit over an hour but with all the stops and the extra loop it was a little over two hours.

When I set out with the group on Saturday, Thursday's run was still in the back of my mind. And I was mentally working out where all the toilets were on the route once I knew where we were going. But it seemed that Thursday's run was an aberration. I managed the (almost) 19 k without so much as a murmur from the deep.

I decided to run again on Sunday afternoon to get a fourth run in for the week and again all went smoothly - nearly 12k to take my total to 55 for the week.

And then I went to the speed session this morning. Coach Chris slotted us into groups according to speed and I slotted myself into the slowest group to give myself extra time between reps. I knew right from the first rep that I was running on very tired legs. I managed the first three 1k reps with the group then dropped out to run the last three in my own time - extra recovery is still essential.

I was feeling so cocky after my great weekend and now I'm back to asking myself questions. Should I just stick to 3 sessions a week? Should I do one session as a run/walk? Should I keep my weekly mileage under 50k? Should I do one harder week and one easier? How will I know when I can push myself harder unless I actually do it?

I didn't intend for this post to be negative. I'm still really happy with how things are going. I just have to temper everything with a good dose of caution. And so I don't bore you all with my navel-gazing I have a picture of my last evil cupcake creation. How does caramel mud with a dark chocolate ganache and lashings of caramel buttercream sound? Yep, it sounds like at least an inch on my hips too. Thank goodness I only eat the batter because the calories in the batter don't count do they?!! 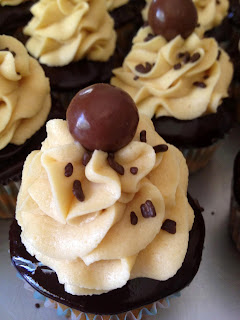