I'd set my alarm for 4:45am the night before. I know I had because I'd double-checked it. But when I woke up with a start at 5:00am the little alarm symbol wasn't showing on the screen. Somehow I must have turned it off. Or maybe I'd imagined the whole double-checking scenario the night before. Either way I was running really late.

I had less than 15 minutes to get dressed, strap my feet (complicated explanation for this one - just accept that it stops my ITB from flaring up), stuff a banana down my throat, drink enough water to stop dehydration yet not too much as to cause a stitch or enforce lots of toilet stops AND go to the toilet.

The first four items on the list were totally doable in that time-frame. The last? Well that was totally up to the whims of my intestines and we all know how whimsical they can be at times.

Luckily, whimsy smiled in my direction and I was ready in ten minutes flat which had me wondering why I've been getting up so early in the past when the stress of having to make a tight deadline is such an effective cleanser.

Saturday's long run was a designated No-Watch run. The point of it was to make the group get back to grass roots running. To run for pleasure. By feel. Without electronic prods making us push ourselves harder than we should.

We ran a familiar route so we'd know the approximate turnaround points but apart from that there would be no data to input into my program. No uploads from my watch to the Garmin website. It was a 'if a tree falls in a forest and nobody hears it does it make a sound?' conundrum. Would the run even count? I wasn't sure how I felt about it. #dataaddict

How stupid am I?? Of course it counts when there's 30 or 40 other runners to act as witness. To say nothing of the cyclists, walkers and non-GaleForce runners that we went past. Basically nothing had changed apart from not having to stop and start my watch at water stops - and believe me I tried.

It was even quite liberating. I didn't have that beep every kilometre that forced me to look at my watch and reassess my pace. It felt like we were running at a pretty good pace and had I seen that I was running at, let's say, 5:10 then I would have started to worry that I was going too fast and backed off the pace. If I'd seen we were running quite slow but it felt harder than I thought it should then I would have felt a bit annoyed with myself. Having no watch allowed the run to just be a run - and I could pretend that it had been awesome. 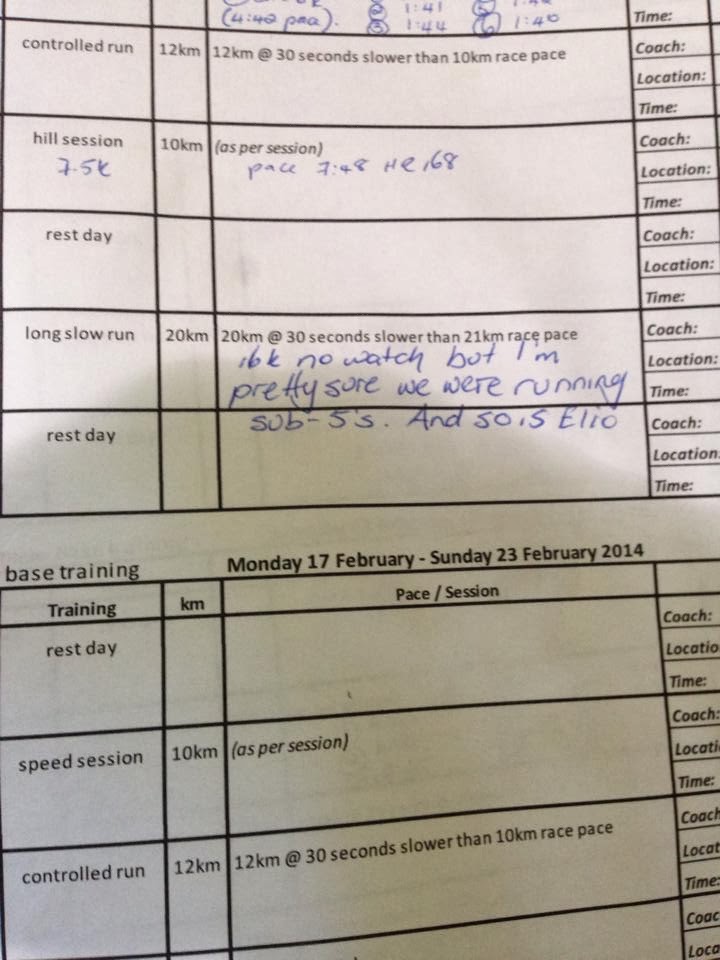 Because it was - just ask Elio.

In a miraculous turn of events I managed to track down some footage of the epic tussle between Bevan and I at speed last Tuesday. It's just the last hundred meters of the final rep and I'm the dude in the black pants (my cute checked ones were in the wash).