So I bet you're all dying to know how the Great Coffee Showdown turned out.

Before I go into it in exquisite detail, I'd like to point out that I am a huge wuss. I really hate confrontation and I hate to disappoint people. If left to my own devices I would probably have said nothing about it and just gone shopping for a stylish dress, high heels and matching handbag. But having put it out there and getting so many responses, well I couldn't really wimp out this time could I?

So yesterday I turned up at my coffee shop, The girl at the cash register was new so I had to explain my order to her. The girl at the coffee machine was the usual barista and, rather than check Facebook while I was waiting like I usually do, I decided to keep an eagle eye on proceedings. I had all your voices ringing in my ears telling me to get what I'd ordered - but to do it in a nice way. If she went to give me my coffee without its crowning glory, I was going to ask her nicely to add it while mocking my chocolate addiction.

But something strange happened. Maybe she reads my blog. Maybe she is psychic. Or maybe she bothered to read the order on the screen in front of her instead of leaving it up to her memory.

I got my cappuccino!

And I didn't have to say anything at all. My reputation as a wuss can stay intact.

And I bet you're all dying to know what happened with Loo-Loo.

I can happily report that there has been no sightings of this monster from the black lagoon since I provided her with an escape route. I can only conclude that she made a bid for freedom and high-tailed it out of the toilet.

Either that or she accidentally choked on an un-flushed floater and died an excruciating death followed by a burial at sea. Not a happy picture so I choose to believe the first option. I imagine that she's running around the backyard as I type this - eating insects and being shunned by other skinks because she smells kind of funky after spending a couple of days in a toilet.

As for the the new couch. We've given up even thinking that it would be a dog-free zone. That was patently way too ambitious for people who treat their dogs like humans. And why should I deny myself the pleasure of a nightly snuggle with my favourite person pet. That's almost as good a mental-health therapy as a run. 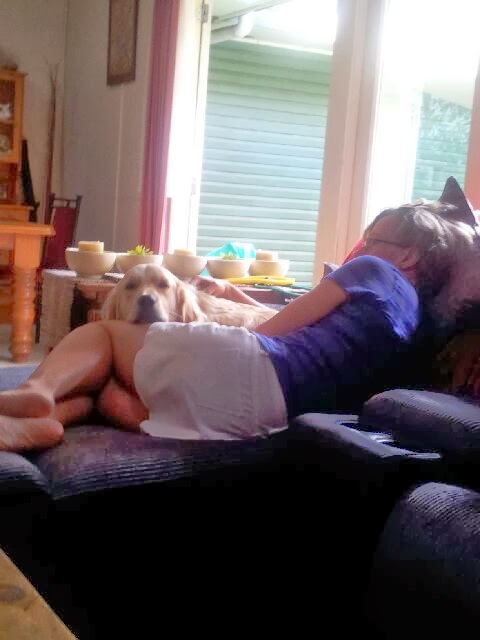 And finally - this week's speed session.

I said I would stop mentioning Bevan in my posts. I am clearly a liar. Or he's forcing me to mention him by engaging me in our weekly tussles.

This week's session was 500s and 1k reps. I was tired and I'd promised myself that I wasn't going to be drawn into pushing myself really hard. That promise lasted for all of the warm up.

There's something about having someone just a little bit in front of you that makes you push yourself to keep up. Bevan took off on the first rep and I settled in to my now-traditional spot a few meters behind. I kept telling myself that it was the first rep and not go too hard but the need to stay in touch out-weighed rational thought.

I was hoping that this week he wouldn't wait for me at the end of each of the reps so he'd get further and further in front and there'd be no need to try to keep up. But we don't always get what we want and every time I finished a rep he was there waiting for me.

Turns out that the first rep, where I thought we were going too fast, ended up being our slowest 500m and our last was my fastest. All my 1k reps were in the 4:30-4:35 range. I haven't run such a good, consistent and strong session in years. And Bevan - well he was pretty happy with his set too.

It might hurt and I might dread it sometimes but I'm loving the results of this in-house competition. My confidence is growing and I'm absolutely certain that Bevan is going to get his sub-25 min 5k in a couple of weeks.

We both might be on the other side of 50 but we're pretty damned awesome!