I've had a couple more running set-backs in the last two weeks - just when I thought I was going to get back into it. I got the flu. Like the vast majority of Brisbanites. And once I thought I was getting better I got hit with another round of fevers. Yay!

There has been very little running happening in my world. And the flu made me lose even more weight. Ughh!! Last week I weighed the lightest that I have since I was 13. Skinny is not a good thing to aspire to (although as a 16 year old I would have disputed that). Wallis Simpson was wrong.

You can definitely be too thin.

Being thin and getting over the flu has left me feeling weak and pathetic. Climbing up stairs is an effort that leaves me breathless. It's amazing to think that just two weeks ago I ran a 29k LSD. Fitness is hard to gain and so easy to lose at my age which makes consistency so important.

So this week it feels like I'm starting over. Easy running with good recovery. And a concerted effort to get my weight back where it should be.

I started on a good note with a run yesterday. It was going to be a short easy one. A single digit run. Mostly flat.

It turned out to be a 10k with a few hills because I felt better than I thought I would. With a couple of breaks because my intestines get confused when I run in the afternoon. Confused intestines are not a runner's friend.

My first pit-stop was only 500m from home. In a toilet that had no lock - as I realised while sitting contemplating the folly of afternoon running. Luckily when someone opened the door I'd already managed to get my shorts up and she was more surprised/embarrassed/horrified than I.

The second pit stop was only a couple of kilometres later and was more to stop a wardrobe malfunction than anything else. Shorts don't fit the same way when you've lost 5 kilos. Thank goodness for drawstrings.

The rest of the run was as a run should be. And this morning when I got out of bed it felt strangely satisfying to feel the slightly stiff muscles and sore feet. Tomorrow I'm hoping to be back at speed - although there is a certain irony in my use of the word 'speed'.

I've been here before. Building up again after a lay-off. My body knows what to do. I just have to be patient and it will come. Slow and steady will win this race. 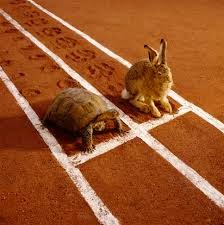