Show Us Your Tits

Some weeks it seems like the Universe is telling me something.

Last week the Universe wasn't just telling me something. It was yelling at me. In its best, crudest construction-worker impersonation. And what it was yelling was "Show us your tits!"

Apologies to the more sensitive among my gentle readers. Not my words. I'm just quoting from the Universe. I would never be so crass.

The first time I heard the voice of the Universe was when I was getting changed to take the dogs for a walk. There had been men mowing the hill that overlooks my bedroom all day and some were still up there so I was doing the surreptitious change in the corner of the room where I'm pretty sure that passers-by can't see into. Of course I could have put the blinds down but that would take away all the suspense of being almost caught with your pants down.

I pulled off my top and released the twin princesses from their bondage. Why twin princesses? Because this is my fairy tale and although ugly step sisters are probably more accurate, I'd prefer to be on the side of good - not evil.

I was partly dressed (ie just wearing a pair of shorts) when a small black and white shadow darted into the room, grabbed my top off the bed and raced away with it. Kind of like he did with this empty can of dog food from the recycling. I know that I have failed as far as being a good blogger was concerned by just showing an 'almost' illustration of what happened. If I was a good blogger I would have had my camera at the ready and snapped off a couple of pics as I was doing the half-naked chase around the house. But I wasn't carrying my phone (camera) at that particular moment - just a sports bra. 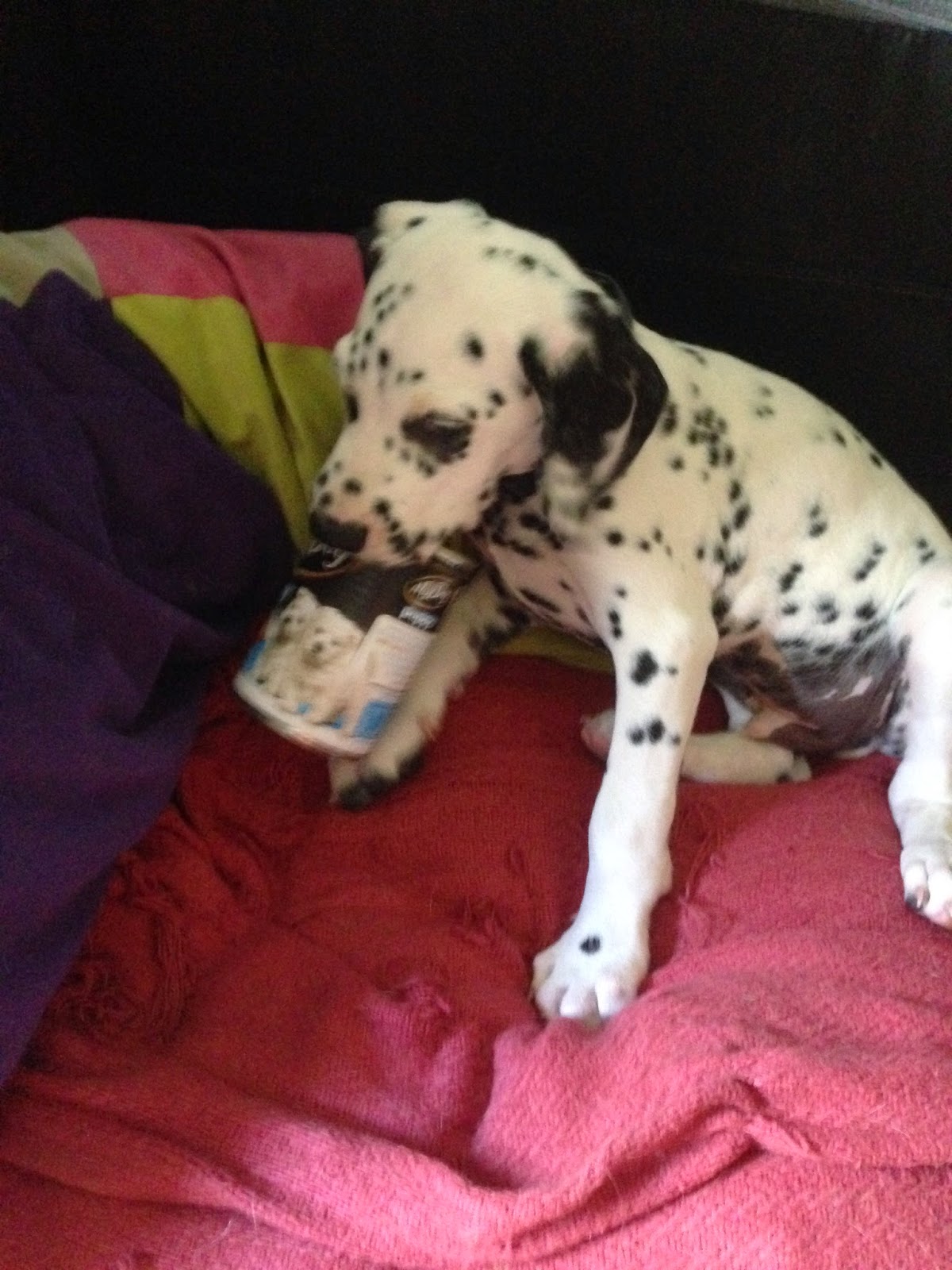 This time, however, Ricky didn't run to his bed with his trophy. This time, because I was chasing him, it had to be a game and chasing games are best played outside. Where the mowing men on the hill have a much better view of proceedings than that little sliver through the bedroom window that they may or may not be able to see through.

I reached the back door and then had to make a decision. Topless backyard streak or sacrifice the $4 KMart singlet. It was a tough one. Would the tiny percentage of frugal Scottish blood win out over years of Baptist indoctrination?

No it did not. I went back to my room and continued to dress while Ricky waited on the path in the backyard, top in mouth, for the game to continue. Because, apparently, it's only a game of chasey if someone's actually chasing you.

Shirt rescued. Modesty intact. First round to me Universe!

Second round happened just a couple of days later when I decided to wear my brand new, just-because-he-loves-me anniversary top (that Iven only just found out about when he arrived home on Friday). Such a pretty pink and such soft, light fabric - I knew that I was really going to love wearing it in the hot, humid conditions.

And I did. While I was walking up the hill to where I start my run. But as soon as I started to actually run I wasn't so happy. That soft fabric was so soft that it stretched with every step and within 100 metres half of my bra was showing. So I hoiked it up, kept running and within metres I was flashing most of my bra again.

Of course I could have gone home and changed but I'm a runner and runners hate to take a step backwards. Let alone walk up a hill, down a hill, get changed then tackle those hills again. See, I hate hills so much that I'd rather run around Brisbane half-naked than go up and down them unnecessarily. So I persisted with the readjusting and rearranging until I had a genius idea. Okay, genius might be an exaggeration but getting any thought that's lucid and not a 'look at the pretty bird' type thought is genius in my world.

The genius idea was to pull up the straps of the singlet and tuck them under my bra straps. Yeah, I know it's not an idea worth patenting but it got me through that run sane. And gave me round two against the Universe. 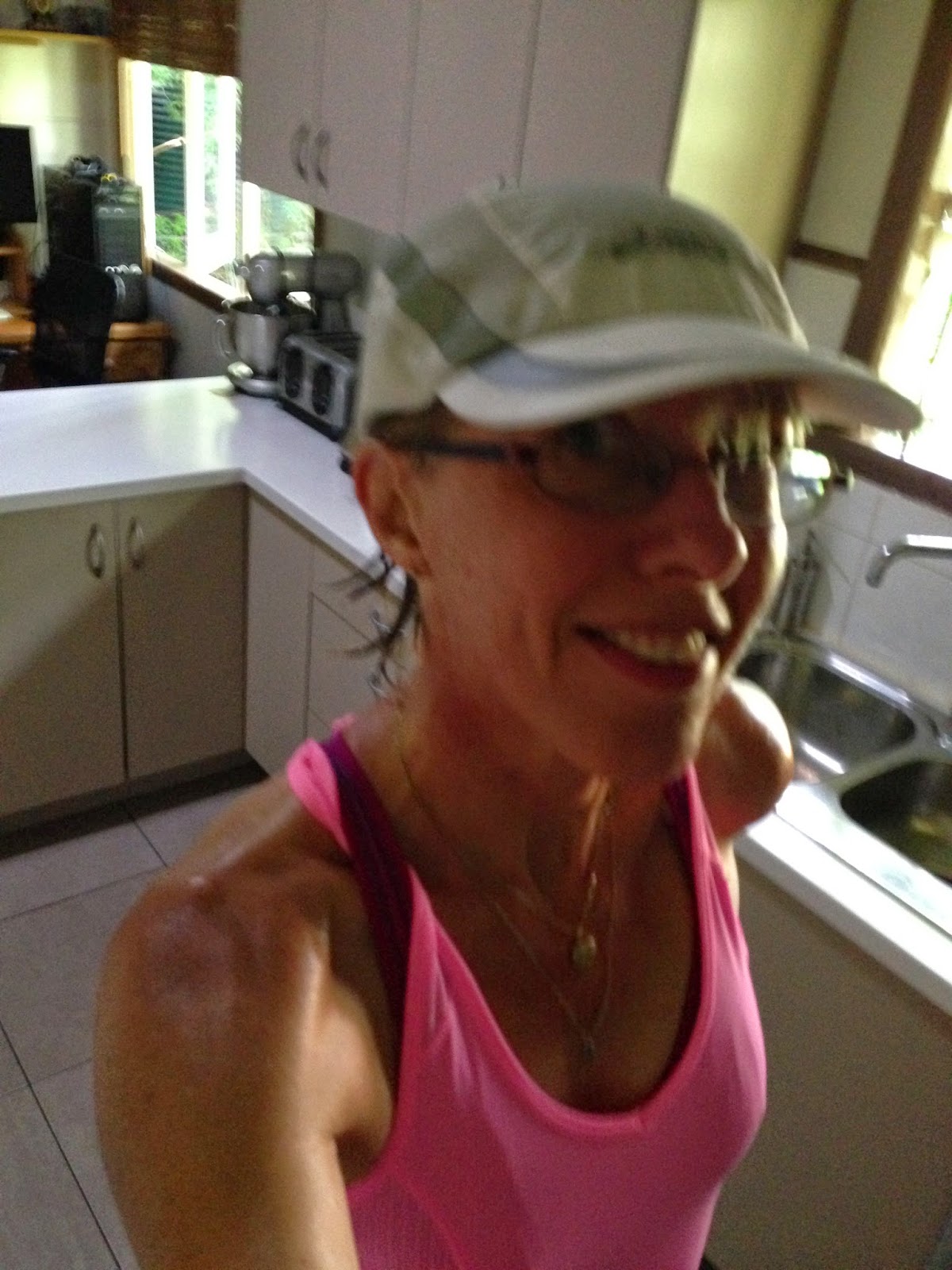 So there Universe! Two attempts. Two failures. I'd give up now or you might eventually win and believe me, you'll be sorry!!
Posted by Char at 3:14 PM