It was something indoctrinated into me way back in my high school days when I was (briefly) in the track squad. You run, you stretch. It's almost an automatic response like a dog drooling when he's looking at your dinner and willing it to fall onto the floor.

I don't know if it makes me a better runner. I don't know if it prevents injuries. There are studies out that encourage stretching and others that say it doesn't really make a difference. All I know is that it makes me feel better. And I feel like I'm delaying the inevitable onset of rigor mortis.

But since we've gotten this little guy, stretching has become an extreme sport - only to be undertaken at your own peril.

My prime time for stretching is the little window I have between breakfast and when I really have to get going for the day. And this seems to be the exact same time for the daily battle of strength, skill and agility between our three dogs.

So far Toby has it all over Ricky on the strength and skill side of the daily challenge. He generally wins tug-of-war with most apparatus - rope, teddy bear, underwear, urine-soaked towel. And he can always outwit Ricky when they're playing chasey. He knows that if Ricky runs from the lounge through the laundry and the kitchen, the puppy will appear at the kitchen door and he doesn't actually have to chase him to catch him.

Ricky always wins the agility section of the skill test. Mostly because he's young, fast and isn't wearing a cone-of-shame that tends to get caught on door frames, tables, chairs and the legs of humans.. Although he has tried it on for size.


Bubbles wins nothing. She'll try tug-of-war but only having half the requisite amount of teeth puts her at a distinct disadvantage. So her major contribution to the daily mayhem is to stand and bark from the sidelines. I think she's trying to cheer Toby on - not the interloper. 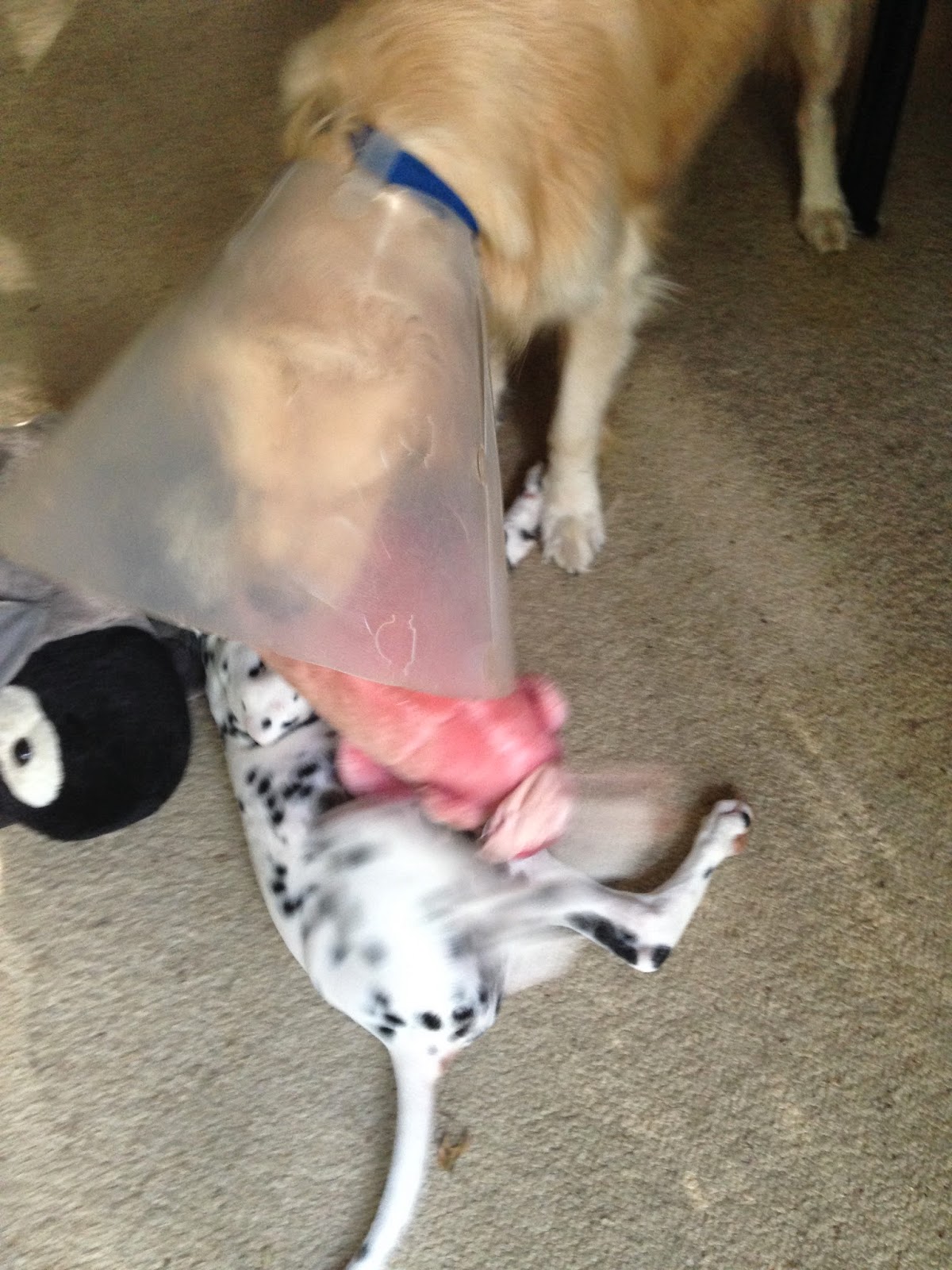 Today's stretching session was particularly brutal. I ended up with three minor injuries and the very real chance of bruising.

Toby bit my foot when the toy they were fighting over ended up a little too close. I'm sure he was aiming for the pink gorilla but I think the cone-of-shame refracts light like a prism and he ended up with a wayward lunge. And I'm not just talking a little nip.

Then Ricky decided that it was quite acceptable to walk over my face. And, hey, what are those shiny little baubles in your ear lobe? It wasn't a through and through injury but it made a little tear leak out of my eye.

And finally I was almost decapitated by the cone-of-shame. Actually that could make an interesting murder mystery novel. Where the crazy dog lady seeks revenge for all the perceived wrongs committed against her by way of a razor sharp, carbon fibre cone-of-shame fitted to her lovable golden retriever.

Anyway I'm going to have to re-think my stretching time. Or location. Or the need to do it altogether. It's become way too much of a contact sport for my liking.