Every long run can be a bit of an adventure. Not knowing how your body will hold up to the demands of a couple of hours on the road, not knowing if toilets and drink stops will materialise at exactly the right moments or not knowing that Wonder Woman will come around the corner just after you've been talking about her (yes, that happened last week) all add to the mystery and wonder of a Saturday morning.

But not knowing exactly where you're going adds a whole new element. So from this time forth, the run that seven of the GaleForce sqaud set out on at 4:00am on the 16th on May 2015 will be known as the Magical Mystery Tour. Because Magical, Mystery makes it sound all magical and mysterious and kind of fun and I'd like the six other runners to remember it that way because the reason that we were lost was me.

This whole run was conceived from boredom. I was a bit bored with work on Friday and the boredom flowed over to thoughts of running the same old, same old again the next day. Sure they're safe bets and flat and everyone knows the way but we do them over and over and over again. I wanted to see somewhere that I hadn't seen in a while. The fact that we'd be running in the dark for at least the first ninety minutes was neither here not there. And the fact that the route I was thinking of had a fair few hills and I hate hills was also such a minor consideration that I just didn't.

I can get my way fairly easily in this group of runners. I think it's because I'm the oldest and they've all been taught to respect their elders. Or maybe they don't want to upset me because they've read my blogs and rightfully acknowledge that it's safer not to poke the crazy lady. Anyway it wasn't too hard to get a couple of them onside using all my powers of manipulation that I've honed raising three sons and a fairly obedient husband. Adrian took a little more to convince because he too doesn't like hills  and he wasn't familiar with the area I wanted to run in but I told him that there was only a couple of hills and that we wouldn't get lost. 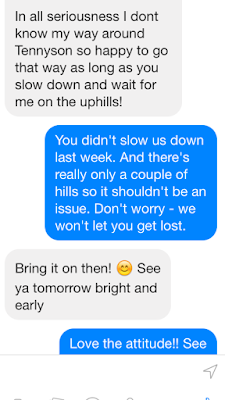 But I didn't lie intentionally. I knew most of the route. There's just a little bit of it that I'm woolly on. And I've run it quite a few times. But mostly with people who knew the way and in daylight. I figured that at least one other person in the group would know where to go to get to the Corso. But when we met at the Regatta Saturday morning I found out I was wrong.

Should have done a little homework Friday night and at least taken a look at the woolly area.

We set off dauntlessly. I'm pretty sure the whole group thought I knew exactly where to go. Boy, did I have them fooled. We ran towards Indooroopilly and over the bridge, through the back streets of Chelmer, out to Tennyson and through the tennis centre. And that's where I started to feel a little concerned. I'd run to the Corso two different ways - through more back streets or down Hyde Rd. I'd been going to attempt the back streets way but a little voice of reason told me that the Hyde Rd was was more straightforward so that's the way we went.

And it should have been more straightforward. I checked the map once we finally got back and we were so, so close.But somehow we took a left instead of the right we needed.

I've gone over it and over it in my mind and where I thought we were running looks nothing like that map. That's probably because I have a really lousy sense of direction. Probably should have disclosed that to the group before they put all their trust in my navigational skills. And they were so nice about our aimless little 4k jaunt. Not once did anyone mention the word idiot. They all kept running those dark, hilly streets without complaint. Oh yeah - forgot to say that this area had a lot of hills. Not the couple that I'd promised Adrian. There were a heap of them! So sorry about that Adrian. My bad!

We ended up trying to choose bigger roads with bus stops on them in the hope that they'd lead to even bigger roads that might look vaguely familiar. It was a good strategy and led us to a place a couple of hundred metres from where we'd turned off the main road in the first place. Yeah, we'd gone in a complete circle.

But at least I knew an alternate route that would get us back to where we wanted to be. And it wasn't a kinda-think-I-have-an-idea know. This time I definitely knew. So the remainder of the run was uneventful.

And once we got back to the Regatta we were able to regale the rest of the group about our Magical Mystery tour. There was thoughts that maybe I'd tried to sign my name on the route map (would I be that arrogant?). Or that I was trying to draw dirty pictures (which is much more my style). But the map will attest that if I was attempting the latter I have a poor grasp of anatomy. 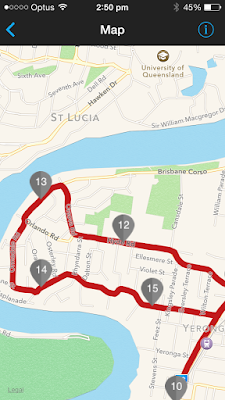 Strangely, though, I'd like to try that route again. Because I don't like to leave things on a fail. I'm just not totally sure that I'll be able to convince anyone to come with me next time.