All Over Bar The Shouting

The hardest weeks of marathon training are over and done with and I'm still basically in one piece. That's a pretty good achievement for this old body.

We ran our last almost-a-marathon long run on Saturday. Another 37k. Another pretty hilly route. And it went well. We'd decided to tackle the Corso again because last time was such a fail - thanks to my unerring sense of direction. And by unerring I probably mean non-existent. Maps were consulted. No winging it this time. 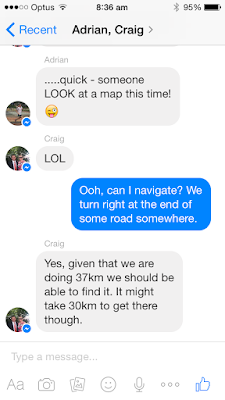 This time we found it without any problems at all. Which goes to show that consulting a map is better than winging it. Especially if you don't want to be stuck in a perpetual loop in Yeronga.


There were no recurrences of the ITB pain from last week so I'm calling that an aberration but will be meticulous in doing all my non-running exercise. I was a little bit concerned about it before we started but not concerned enough to bring a phone (just in case I needed to ditch the run). I made sure to stretch at some of the water stops but I don't really think it was necessary. There wasn't even a hint of the tightening that's the precursor to the pain. Everything felt good.

For those non-runners out there who probably can't wrap their heads around feeling good and running 37k I'd like to say that yes, there is some suffering involved. Legs start to get tired. Feet start to feel the constant pounding. Shoulders tighten up. Fingers swell. Stuff runs out of your nose. Bras start to chafe. And you get to the point where you've really had enough. So feeling good isn't literal. It's more that you feel good enough to keep going. That you haven't had anything major happen that makes you stop without finishing the allotted distance.

For me, last Saturday, feeling good meant that I could push the pace for the last 6k. We'd been running around the 5:30 mark for most of the run. My last 6k dropped to 5:10s and lower. And even though the body was tired there was an enormous sense of satisfaction to know that I still had something in my legs at the end.

I'm ready for this marathon.

But in a strange way I'm also a little bit sad that the training is all but done. This is one of the best blocks that I've ever had. I've gotten to run with some fantastic, supportive and fun people and I think that's what's made it so great. I've loved the energy that I've gotten from my Wednesday and Saturday groups and I know that I wouldn't even contemplate doing something this big by myself.

So now it's all about staying healthy, uninjured and sane. Less than three weeks to go!