I'm pretty sure this is how things are for lots of people.

And then one day it happens. Might be months or years later. But it does happen. You get annoyed. By the way they squeezed the toothpaste out of the tube. (OMG it has to be from the bottom, not the top!) By the way they folded your underwear. (Inside out? Who does that?!! What on earth did your mother actually teach you?!) By the noise that they make when chewing crunchy food. (Will you do that in another room or at least keep your mouth shut while you're eating?) And you decide that they are not perfect or even almost but with a little tweaking they could at least be a bearable companion.

I've been tweaking for almost 30 years now and I swear that when one issue is resolved another one rises. I'm not sure if it's to keep me on my toes or to break my spirit. Some days it gets damned close to the latter. But I am an endurance athlete and I don't give up easily. Which is why it's almost 30 years.

The current battle I'm waging is in the laundry. I think it's taken almost 30 years for the laundry problems to come to a head because it's taken almost 30 years for me to be doing laundry only for the two of us. And my beef is the state that his clothes make it into the wash. They arrive more often than not, inside-out so I have to spend a large amount of time inverting them. Drives this time-poor person insane some days.

So I started my campaign to win back my free time by asking Iven to make sure his clothes were right side out when he took them off. And he did. Once. He doesn't have the greatest retention for new tasks. So I asked again.

Multiple-asking is often referred to as nagging. And as loathe as I am to assume that mantle, I will if it's for the better good. And by that I mean I don't mind nagging if I end up getting my own way. Nagging will work. For a while. Until he doesn't hear it any more and his shirts arrive inside out. Ughh! He's lucky that there are no sharp implements in the laundry some days.

I tried telling myself that in the scheme of things it wasn't that bad. I could just suck it up and do it. Like a good 50's wife. But a good 50's wife didn't run their own business and train for marathons and the other day, in a particularly busy work week I just hit the wall and couldn't do it any more. So I folded up his clothes inside out.

Hardest thing I've ever had to do!! Which probably means that I have a touch of OCD to add to my list of crazies.

Then I waited for Iven to mention it. To complain about the less than perfect manner in which his clothes had been folded. The complaint never came (possibly because he has learned one important lesson in our 30 years together - don't poke the bear). And I started to think that my subliminal message had worked better than all the previous nagging.

But then I came home a few days ago day to find Iven wearing the shirt that I'd refused to invert, still in its inside-out state. 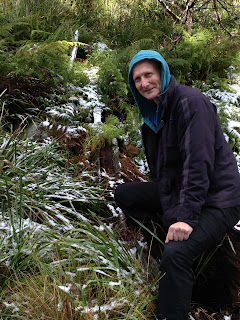