I haven't shared this with too many people but I've been a bit injured.

Okay that might be an exaggeration. I've shared it with everyone who's been unlucky enough to be in earshot lately. But this injury really hurt. And I bled - a lot! I wouldn't be surprised if I'm anaemic. (Note to self - eat more red meat this week.) And you don't get sympathy for such a big boo-boo unless you let people know that you're injured. 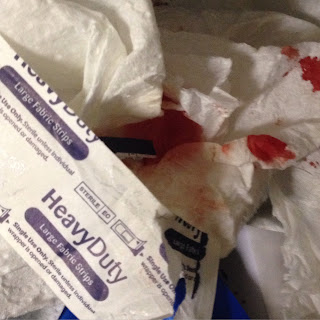 I told my running friends as we were about to start our long run last week and the sympathy was overwhelming. It gushed right over me and made me feel all warm and fuzzy. 'You poor thing I don't know how you can even run with that injury.' Made me feel so loved and admired for my hard-cored-ness. But I did have just a little inkling that maybe, just maybe, there was a touch of sarcasm in that comment. That what the commenter was really wanting to say was 'Stop your whining - it's only a little cut on your thumb.' But only a heartless person who's so dried up inside that their nose does not drip when running in the cold would ever think of being sarcastic to a mortally wounded fellow-runner so I assumed that the sympathy was real.

But just to make sure that everyone knew how deep my cut was I thought I'd better post a picture of it on Facebook. Serious matters should always be aired on Facebook. Unfortunately the gaping flap of skin had glued itself down and what was supposed to be an impressive picture of gore was incredibly underwhelming. A bit like the enormous spider that you kill that shrivels up to pea-size before anyone can be astounded with your bravery.

No one was overwhelmed.

So I have had to battle through this week with quite a disability and only a modicum of empathy. It's been hard to do anything. I managed to get out of washing up for a couple of days and that was kind of fun. But there was no getting out of working when there were deadlines. I kept getting pins and thread caught in it. But worst of all was writing. It was so hard to do my crossword every day. But I'm a trouper and soldiered on through the pain and each crossword was completed (or almost - some of the clues were ridiculous). 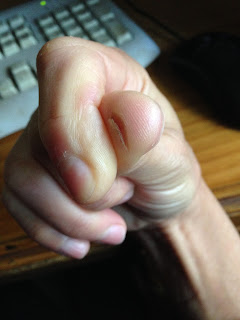 I bet you're all wondering exactly how I injured myself. It was one of those run-of-the-mill chocolate curling accidents. Who knew that creating chocolate cake-toppers would be fraught with such peril?!! I've spent a lot of last week Googling the mortality rates of chocolatiers but the stats seem so be pretty hard to find. 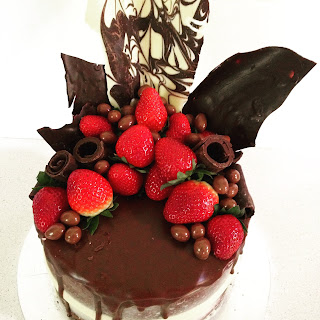 I think I should stay away from sharp implements.