Run How You Feel - Brisbane 10k

I almost turned my alarm off yesterday morning and stayed in bed. It was cold and I was tired and my bed was warm. Getting up meant that there was pain ahead of me.

Saturday's 24k run had been okay. Not great. Not awful. Just so-so. The only thing that really got me going (apart from the urgent need to visit the loo) was knowing that there were people expecting me. So I got dressed and tried to fool myself into thinking that I'd just be taking it easy - unless of course I, amazingly, felt great.

Just run how you feel.

I'd done a little bit of preparation the night before. I'd actually planned where I would park and bought a voucher for it. But I, stupidly, didn't actually read how the voucher worked and didn't use it when I entered the car park thinking I'd only have to use it at the end. But it actually was a good thing to do something stupid because it took my mind off not wanting to be there.

It was only a short walk to the start where I found my friends, had the obligatory pre-race photo taken and discovered that the toilets in the gardens were locked. I also discovered that the queues for the porta-loos were horrendously long so what's a girl to do apart from find a discreet bush with a view of the duck pond. That fountain definitely made it easier to go. 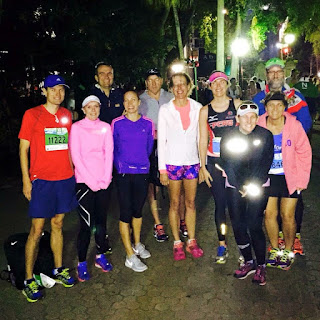 It was getting close to start time so I took off my jacket and stashed it in the bushes and kind of hoped that it'd be there at the finish. It didn't really matter if it wasn't just meant that I could use it as a boomerang jacket - throw it away but it keeps coming back. Then it was a matter of lining up at the start and waiting.

It's not a huge event even though it's a capital city marathon. There were only around 1000 in the 10k event. We could be right up close to the start and that meant that right from the time we were cut loose we could run. No dodging. No weaving. No having to slow down to find a place to pass. Just run how you feel.

And I felt okay ... ish. I felt like I was working reasonably hard. Without being stupid because it is 10k after all and you don't want to burn out before half way. Particularly with the hills/bridges that I knew would bite this person who was only pretending to love hills for the day. Seeing that first rise in the first kilometre that I wasn't expecting did almost make me cry so the pretence was only a thin facade.

Watches were beeping all around me but mine stayed silent for a couple of hundred metres. 5:06. Definitely slower than I was hoping for because it felt like I was working hard. Maybe it was still the marathon. Or the remnants of the cold. Or the 24k the day before. Or maybe the buildings were interfering with satellite reception. I had the kilometre to ponder it before I could check again - 5:02. That wasn't going to give me the sub-50 that I was hoping for.

The third kilometre was the climb up to the Storey Bridge. Yes it was unpleasant. Truly unpleasant. But I knew that I only had to make it a little way across the bridge before I'd be heading downhill and a long, flattish section. There's some advantages to running on your home turf. Kilometre 3 beeped at 5:03 but kilometre 4 was the fastest of the day at 4:27.

Once we got down to the path on the other side of the river I started to take notice of the people around me. Most were men but there were a couple of ladies. And they looked about my age. That gave me a purpose - to slowly run them down. I had no idea how many other 'mature and motivated' women were even further ahead but I had my own little race right there. Handed to me on a plate.

The lady in black had been the one standing just in front of us on the start line. At the time I'd decided that she wouldn't be that fast. Shows you how deceiving looks can be. She wasn't elite but she certainly wasn't slow. Took me quite some time to run her down.

And the wiry lady wearing the shorts - well, she was even harder to take. But I did. And that helped with keeping the 5th, 6th and 7th kilometre splits down. 4:38, 4:48 and 4:52. The thing, though, is that she didn't like being passed. She dug in deep and by the 8th kilometre (4:46) she'd passed me back. I had to follow her up and over the Victoria Bridge seeing her pull away bit by bit knowing that I couldn't do a thing about it because, hey, the Victoria Bridge is a bitch for hill-hating runners. 5:04!

The last kilometre I knew was flat. So I tried to regroup and make one last-ditch effort. It was hurting and I was tired but something in my head just wouldn't let me give up. And I was making ground on her. Just a little bit. Reeling her in inch by inch. Knowing that I might run out of course before I caught her.

And that's what happened. She crossed the line 5 seconds ahead of me. But I'd finished at 48:42 - 48:34 chip time. Better than what I'd expected when I'd registered for the race. Better than what I'd expected after the first couple of kilometres. I might not have won my mini-race but I was still really happy with my time. (When I checked the results afterwards I found I'd beaten her on chip time - by one second!)

I hung around with my friends watching the half-marathoners come in and comparing results. Everyone had run really well on a tough course. Yay us! And then I went home, picked up Iven and treated myself to some well-earned empty calories that tasted really, really good. 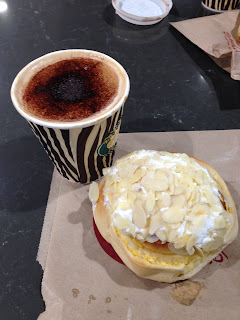 Then a bit of stretching. With canine assistance. 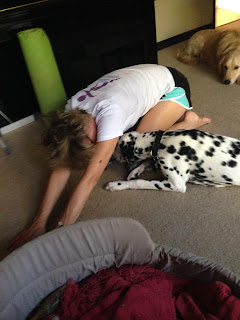 As for my results - the lady who I thought might be in my age group turned out to be younger. 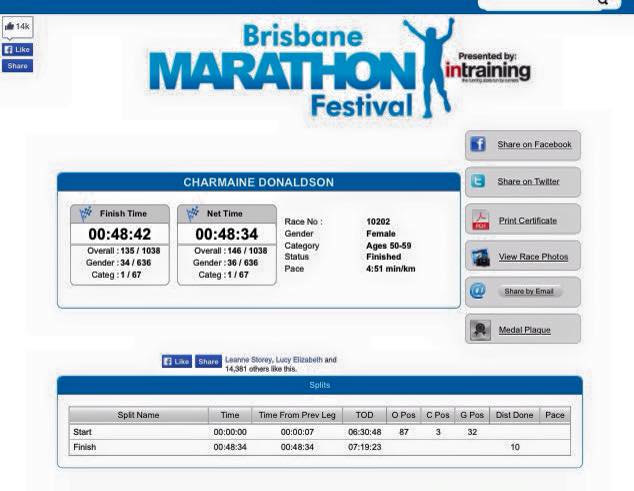 And the strategy of run how you feel? I must have been feeling competitive.