What Doesn't Kill You

It seems like my life is back to a very strict routine of sleep, eat, run, recover, work, repeat.
Once the weekly mileage gets up to the 70k mark I find that I don't have the energy for anything much more than this. And yet for this marathon cycle I have added more. Because I am a masochist. And because #1 son has sworn to me on his life that the more that I'm doing will reduce the risk of my knee crapping out on me in Melbourne.

This week's session at Bodytrack I unwisely scheduled on Tuesday. I say unwisely because Tuesday's speed day and speed is always a tough workout. This particular Tuesday was even tougher than usual. Probably because Coach Chris could sense that I had a strength session on later and he is a sadist. It was a hellish 9 km of running loops around a steep hilly circuit. Even the recovery involved running up a hill which I mentioned to Coach Chris may actually take the recovery effect out of it but he wasn't having any of it. As I said - he's a sadist!

I finished the session knowing that my glutes had gotten a good workout but also knowing that there was more to come.

I did what I could to recover in the little time I had. Ate, stretched, showered. collapsed on the bed with the wolf pack on top of me and then I geared up and headed off. And when I arrived I complained to everyone in earshot that I'd already run 11k that day. On hills. At speed. Hoping that whining would get me a slight reprieve.

Dan, my EP, looked concerned. Possibly at my choice of wardrobe. Then offered a slight modification to my session. We would start with some glute-release stretches before he trashed them again.

Stretching at Bodytrack is pretty awesome because basically I don't have to do any of the work. I just lie there and get stretched. Heaven! The first stretch we did was a hamstring one. Dan was up on the swiss ball with my leg over his shoulder pushing towards me when something that would have been inappropriate in any other setting came out of his mouth.

'Are those tights new? They smell new.'

I am unaccustomed to anyone sniffing my clothing so it was hard to know how to react. I was momentarily grateful that the comment hadn't been 'Did you just fart? Smells like you had beans for dinner' or 'Did you even bother to shower after your run? Smells like you didn't'. And then I realised that Dan is a kindred spirit. I too sometimes let things fall out of my mouth without filtering them first. And I like that feature in others.

As it so happened they were new. I've been making up samples for a client and field-testing them to make sure they do what they're supposed to do. Of course I've opted for the loudest colours I could find. Makes me a little more visible when I'm running in the pre-dawn gloom. 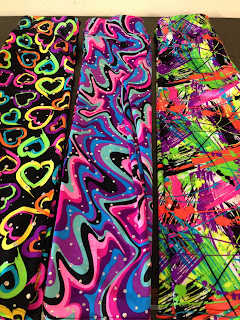 But back to the session. Dan was very good about me laughing at him and then got his own revenge through a variety of cruel and unusual squats, squats and more squats. With resistance, on a decline board, stepping up, balancing on a bosu ball (and I use the term balancing very loosely - it's intent rather than execution). He even threw in some upper body stuff because he couldn't stand the thought of leaving any of my muscle groups without pain.

Damn he's good! And by good I mean cruel but able to make me smile while I'm hurting.

And he picks on everything! Not one flaw in positioning or movement escapes his eagle eye. I thought I had a flat back before he took this photo and showed me how arched it actually was. 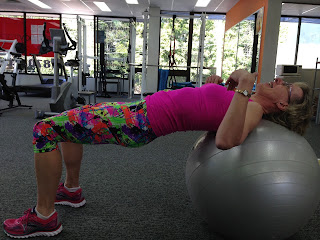 The visual made it easier to correct my form and voilà - the back is flatter. 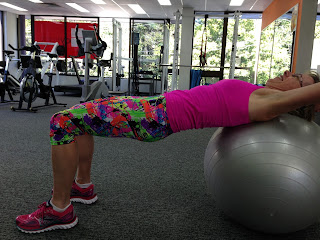 I left the session shattered but feeling satisfied that there is improvement and that I always get an A+ for plank position.

Sometimes I wonder why I do this to myself. I'm 52 and training harder than I did when I was in my 20s. And then I realise that I CAN do it and why not while I still can. I still have goals and goals don't have age-limits.
Posted by Char at 3:17 PM