A Change In The Air

I needed to hold on for just one more week. If I'd waited only seven days more I could have avoided last week's whinge about the weather.

All of a sudden things are much more pleasant again. The humidity's lifted and I can breathe once again. Not being able to breathe was becoming problematic on my runs. Oxygen intake is a vital element to a good run. I love that first hint that summer's coming to an end.

On Tuesday I woke up and there was almost a nip in the air. Not enough to have me consider wearing anything extreme like a t-shirt. But enough to have me quite excited about the session. Excited that it would be a little easier to run and excited that I wouldn't end up quite as moist as the last few weeks have left me and excited that I'd taken my match-matchy skills to beast-mode level. Aqua hat, singlet, bra, socks and shoes. And yes, the tights had aqua in the print. 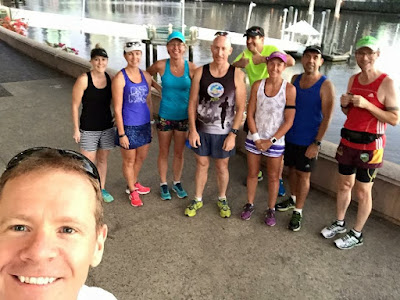 It was a speed session and speed session is rarely one I get excited about so that tells you just how happy I was about the weather. We were doing 1k reps but it wasn't as simple as rep, recovery, rep, recovery. The rep was supposed to be at 3k time trial pace and the recovery a minute slower than that.

My pacing abilities are not the best. And my watch isn't that accurate at giving me a snapshot of how fast I'm going. It's fine over a kilometre but when I look down any other time other than that 1k beep it can read 5:15 pace when I'm going at 4:45 so I've learnt to ignore it and just run on feel. Running on feel is also not that great because for most of the rep I just feel tired. It's judging the subtle nuances of tired that I'm not skilled in.

We set off and I tried to work out how fast to go without burning out in the first rep. One eye on my pretty useless watch and one eye on the runners around me (I know my place in the group) and my internal eye trying to judge if comfortably hard was comfortable enough without it being too comfortable. My goal was 4:34 but my time was 4:18. Oops! Overshot that one.

The return leg was a little harder than I'd normally make my recoveries. 5:27 - a lot closer to the 5:34 I was supposed to be hitting but I was happy with it.

The second hard rep was the usual struggle between heart and mind. My heart tells me I can do it and my mind says to slow down cause it's hurting. Legs hurting, arms hurting, neck hurting (yeah, I know I need to learn to relax my shoulders when I'm running fast), lungs burning and no saliva so swallowing was difficult to say the least. 4:15. Yay - the first rep wasn't a fluke.

My second recovery was in the right ball park again (5:24) but I was so tempted to ease it right back so I could get 3/3 for my fast reps. I didn't - because I'm a little intimidated by the coach and don't want him to think I'm a slack piker - so it was with some trepidation that I set out on the last rep. Just a bit over 4 mins fast running, I told myself. Just 260 seconds of pain. No, not pain - discomfort! Extreme discomfort that's as close to pain as possible without crossing that line. Come on keep pushing. It's the last rep. You can do this.

And not only did I manage real consistency in the hard reps but my last recovery was 5:16 so I feel like I kind-of, almost, nearly did the same on the recoveries.

I finished the session pretty excited. That I'd totally failed hitting my fast pace but failed in a good way in running it faster but not so fast that I couldn't maintain it. That I'd hit my slow pace - or near enough to. And that my fast 1k times were actually faster than they've been in years.

I've changed running groups and the change has given my running a bit of a kick up the butt. My new speed session is actually about developing speed rather than being a weird hybrid speed/tempo session like I used to run. It's shorter so the emphasis is on really pushing the pace, knowing that it's going to be hard but it won't last forever. Plus I'm running with people who are faster than me so I'm having to up my game to try to keep up.

And I'm starting to see results. Last year in winter I was happy to be hitting 4:30s for my 1k reps and yesterday, still in summer, they were down 15s. There's a delicious little frisson of excitement when I think about the year ahead. Yes, I think this change will be a good one.
Posted by Char at 2:05 PM