Why I'll Never Be Trying A New Recipe Again. Ever!

Do you ever get sick of having the same meals over and over again?

I do. And I really can't complain to the cook because I am the cook. I guess it all comes down to not being creative enough and organised enough and not caring enough at the end of a long day to find something tasty, nutritious and not too time-consuming to make.

Tuesday morning I got chicken thigh fillets out of the freezer to make one of the four recipes in my head for chicken thigh fillets. Didn't know which one it was at that moment but it didn't really matter. I'd make that decision later on. A couple of times during the day I'd think about it then defer the decision because I just couldn't get excited about any of the options.

I was still vacillating at 5:00 pm and that's not good because that's when I actually have to start making dinner. But then it came to me. Inspiration. A flash of genius. I'd try something new. Maybe chicken and broccoli. Google came to the rescue with many, many, many different versions but luckily I had the ingredients to the first one on the list so I printed it out and I was set. 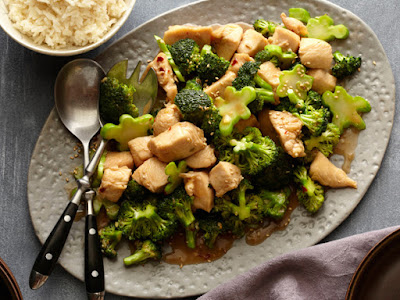 It wasn't a complicated recipe. Thank goodness because complicated can make me take short-cuts and the end result won't ever resemble the picture I was trying to emulate. It was basically making a marinade for the chicken, chopping up the broccoli and stir-frying it then frying up the chicken with the sauce ingredients and you've got a delicious dish. Hopefully.

But - yes, there had to be a but - there was a point where the recipe gave the option of adding chilli flakes. I do like a little heat in Asian dishes so I took that option but could only find chilli powder in my pantry. Flakes, powder - same-same. Except it's really not. Flakes don't become air-borne quite so easily as powder does. I made the monumental error of breathing just as I pulled the chill-filled spoon out of the bag.

Just as a small aside here - I have had three babies. It was a long time ago now but three babies does have a life-time impact on a woman's body. Let's just say that things don't quite work as well as they used to and one of my sphincters has a three-sneeze limit. I sneezed at least 10 times. Do the maths and reach your own conclusions. I'm sure you've got the gist.

Sneezing also usually makes stuff come out of my nose. Whether or not I've got a cold. It kind of felt like there might be something so I put my finger up to check.. No I didn't think of getting a tissue - it was a pretty instinctive reaction and it was an instinct that I should have repressed. I had chilli powder on that particular finger and I can tell you, from experience now, that chill powder + nasal mucosa = pain!

It did settle down quickly. Once I'd washed my hands and my nostril. And I managed to continue to cook during the entire ordeal. Because having three kids means that I've been trained to ignore distractions to get the job done. But this cooking adventure had one more sting in its tail.

The recipe also suggested sesame seeds to be a nice addition. I like sesame seeds and it just so happened that Luke and Becky had made something the other day with them and had put the leftovers in a container in the pantry. Toasted sesame seeds on the top of the chicken and broccoli would be delicious.

So I went to pull out the container. Only to find that the lid hadn't been put on properly. Seeds went everywhere! On the floor. Through the spice rack. On the shelf above and the two shelves below.

There may have been a couple of naughty words said. Loudly. With vehemence. And I may have left the mess on the floor in the hope that the dogs would clean it up once they'd got back from their walk. Turns out that dogs aren't particularly fond of sesame seeds but I have a good husband who recognises when his wife has come to the end of her tether.

I swore then and there that I'd never try another new recipe.

I finally got it dished out. And we sat down to eat and it was delicious! So, so, so good. I'll definitely be adding this one to my short list of recipes on rotation. But with chilli flakes - that powder is going in the bin!