I know. I've been MIA for the past few weeks. I blame it on the public holidays and the facts that I can't blog when there's people hanging around and my computer is in the kitchen so there's always people hanging around. And it could be that there's nothing blog-worthy that's been happening in my life. Just running, working, sleeping and eating.

But then this weekend happened.

It started as all good weekends do. Meeting at 5 am for a nice 22k trot around the river. An entertaining 22k trot around the river due to the higher than average amount of public nudity on display. A few half naked blokes and a girl who'd decided that clothes are for losers and she is not a loser. Just as well it's been a very extended summer so their sensitive bits didn't shrivel up and drop off. 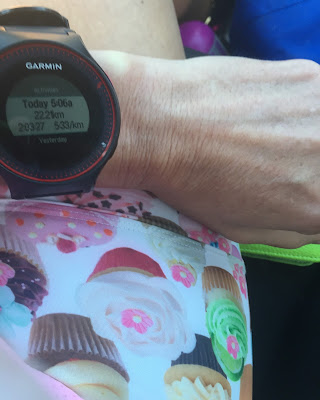 Saturday was also the day that I got to use the birthday voucher for a massage that I was given. Talk about being spoilt. It was the fanciest massage I've ever had. Such a beautiful day spa. And a very competent masseuse. The only downside to the whole thing was having to hold in a fart for the full hour. My boys still don't believe that I did it but I actually do have better control and decorum than they ever believed possible. 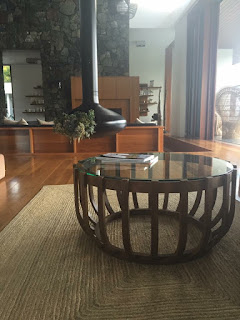 I'd registered for the Mother's Day Classic again this year and that was on Sunday. I kinda didn't really want to do it. I'd run Friday. I'd run Saturday. My Sunday was looking like it was going to be a big one and adding a race was only going to make it bigger. But I'd paid for it and I'm a bit of a tight-wad so I posted up something on Instagram to make me accountable and I set my alarm once again for an early morning. 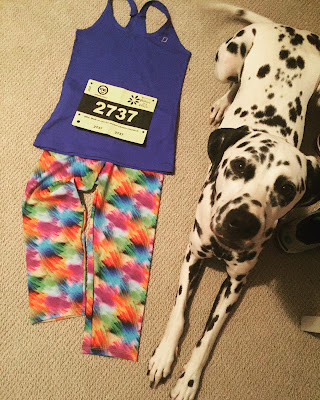 I'd roped Iven in for job of chauffeur, bag-holder, photographer and post-race coffee companion. I only had to mention coffee and he was in - he's easily manipulated. He did a great job finding a good car park and walking me to the loos and the start line. I was still extremely ambivalent about running the event. But when you're dressed in your running clothes with a race bib on your chest standing on the start line you've really backed yourself into a corner. Of course I was going to run. And of course I was going to run hard. It's what I do in a race. It was going to be an interesting exercise in keeping it all together mentally when I wasn't altogether there mentally in the first place.

The Mother's Day Classic is an interesting event. Sooooo many non-runners do it and that means that there's sooooo many people who have no idea about race etiquette. Like not wheeling your pram up to the start line of the 8k run when you're there for the 4k walk. And not letting your entire family of four little kids stand in front of the elites. So little common sense on display. What hope is there for humanity?!!

We had to endure another really bad warm up session. Again - no common sense!!. Don't encourage us to all crowd together and then make us do windmills with our arms. That is not going to end well. And no choreographed sideways movements. We're runners - not dancers. Someone is going to go the wrong way.

And then finally we got to run. And because I'd snagged myself an awesome start position I could run freely from the start. Not always the best thing for a runner who has a very poor but optimistic ability to pace. I also didn't warm up. Part of my ambivalence. Not a smart move. By 500m I was in oxygen debt and I only hoped that it meant I was running fast-ish. First k - 4:32. Fast-ish. I'd earned my discomfort.

Kilometre 2 felt a little better. My body was getting over the initial shock of moving fast. That little lady who'd shot past me in the first k must have had an even worse ability to pace than me. Who'd have thought it was possible? I was reeling her in. Good for my ego cause she looked older than me. 4:36. Only 6k to go. Surely I can hold on for 6 more k??

Passed my nemesis in the third kilometre and then saw the boy with the bandaged thumb I'd been chatting to before the race. Wondered why his thumb was bandaged until I passed him and then he was forgotten. Wished I'd brought music to distract me from what was happening to my body. The beep of my watch once a kilometre wasn't cutting it. 4:40. Oops slowing down.

I know this route so well. We run it almost every week. Sometimes twice a week. I knew there was a rise coming up. Let's call it a hill to make me feel better. Keep pushing. Stupid hills! And we got to run just far enough that the turnaround was past the bottom of the hill and I was going to have to run it again. I remembered my mantra - we don't train so races won't hurt, we train so we can cope with the pain. Kinda wish that training meant that it wouldn't hurt. 4:45. I'm starting to see a trend here and it's not good. But hey, over half way. Less than 20 minutes more and then the hurt will stop.

Getting to the halfway point gave me a little lease on life. Picked it up for the next k and managed to nudge in under 4:40 again. 4:37. Three more k at that pace?? Maybe? Probably not!

From there it was a matter of encouraging myself to just run the kilometre I was in. And that was fine for the first 200m of each kilometre. Then I'd remember that a kilometre was quite a long way. And there were more little inclines and maybe I need to preserve some energy just to make it to the finish line. 4:50, 4:51.

Only 1k to go. Time to start trying to pick off runners ahead. But I wasn't the only one playing that game. I passed a couple of runners but more passed me. Que sera. Saw a few photographers and could barely raise a smile but I managed one for Iven who yelled at me from under a bridge - the man is part-troll.

My watch beeped the final kilometre just before I crossed the line. 4:43. Done!! Cumulative time - 38:02. Not so bad. Or at least I believed that until I saw last year's time which was almost a minute faster. Whatever - I don't think I could have run any harder. Maybe age is catching up with my times.

I found Iven at my meeting spot and we headed off for our coffee. Got the message that I'd placed first in my age group over my soy cap and raisin toast. Sometimes it's just about turning up - not speed. 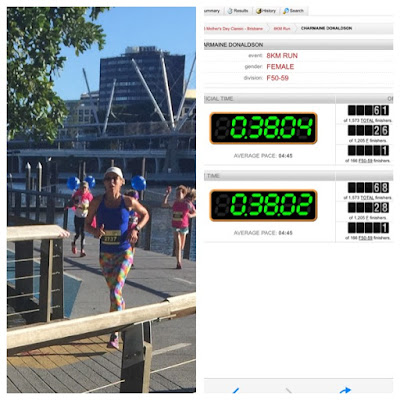 Not sure if I'll run this one again. I might give it a break for a year or so and then see how I feel. Or I might have forgotten my ambivalence by next year. Only time will tell.