If I only had one word to describe my race on Sunday that word would have to be satisfying.

I had no real goals or expectations leading into the race. I just wanted to go sub 1:47 because it's a New York qualifier. And I wanted to be able to walk away from the race knowing that I hadn't given up mentally at all during the race. Because I feel like I had given myself permission to ease up in every race that I'd run this year. Not proud of that - but it is what it is.

I raced in Noosa last year and ended up shocking myself with a 2 minute PB. There's nothing like a PB to make you feel warmly towards a course. It's pretty flat. And it's in a lovely part of Queensland. Didn't take much to convince Iven that it was a good idea. Iven also thought carb-loading was a good idea. The bit about him not actually running didn't really factor into it. 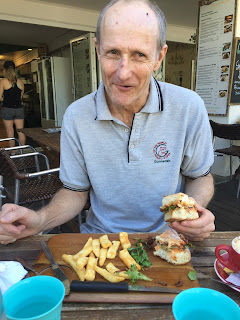 The race started at 6:30 Sunday morning and I'd organised to meet my posse at 5:45. Enough time to check out the loos, go for a short warm up jog up Hasting Street and pose for a couple of pre-race pics. Ten minutes to start time and we wove through the runners lining up to get a decent starting position. Just a short wait and we were off.

I didn't really have a plan apart from holding it together mentally. No pace goal apart from staying under 5:00 minute k's. The 1:40 pacer balloon ran up past me in the first kilometre and stayed just in front of me for some distance. The temptation was to stick with him but I was pretty sure I wasn't in 1:40 shape so I suppressed the urge to kick it up a half a notch. It was way too early and I wanted to stay strong till the end.

I've given up racing with music most of the time. So it was just me with my thoughts. And a few hundred other runners. Trying to stay relaxed but strong. Trying to keep my head conversation positive. Not a hard task in the first couple of kilometres. But telling yourself that you're feeling strong when you've only run 4k is a whole different ballgame to believing it at 17k.

I couldn't spend the entire 21.1k telling myself I was feeling strong so I looked for distractions. Like the dead possum in the middle of the road on the way out. Pretty sure it was a ringtail. The dead possum on the way back was more likely a brushtail and probably hadn't been dead quite as long. CSI Noosa - the animal episode. A moment of silence for remembrance - not that I actually knew either of them - but it seemed like the right thing to do and I didn't have anything more pressing at that moment. Apart from running and breathing. 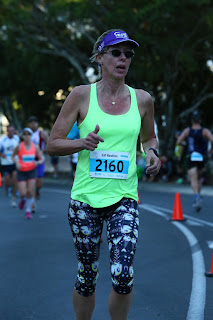 Noosa is a double loop course. I'd run through the 10k marker at 48:30-something and I was happy with that. By the 11k marker we were heading back out again. I was still feeling fairly strong. Surprisingly strong. But my 'surrender' point is always about 3/4 of the way through any race and that was still a while off so I wasn't congratulating myself yet. I've had the wheel fall off my cart too many times not to know that it's not over until you press stop on your Garmin. 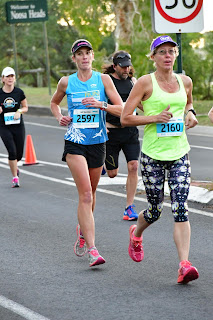 I was running around the 4:50 mark. With a few high 4:40s thrown in for fun. I wasn't watching my watch except to look down whenever it beeped to see that I was still under the magical 5:00 mark. I had no idea of cumulative time but I knew I'd go under my 1:47. Way under my 1:47. Probably under 1:45. I just had to keep pushing as hard as I already was.

The far turnaround point was a welcome sight. Just a little over 5k to run. That's like running back to Southbank from New Farm Park - just without the water stop under the Storey Bridge or in the Botanical Gardens. Trying to chase down Jodi and Andrew. Less than 25 minutes more of pain. Or should I say discomfort because that's less negative.

I started to count down around this point. And, paradoxically, my paces were starting to count up - just a little. I was working really hard now and it was hurting but there was no way I was giving up now. I wanted to see how close I could run to last year's time even though I was convinced that I wasn't quite in the same running shape.

Three kilometres to go. That's just like a three k time trial. Yep, they suck and I hate them but I can run 3k hard if I have to. Generally not after I've already run 18 k - but no excuses. Damn, a photographer and I've got no one to hide behind. Do I want to look like I'm dying? Hell, no. Let's make it look like it's fun. Let's fool the masses into thinking that they too will have a great time if they run hard for over 90 minutes. 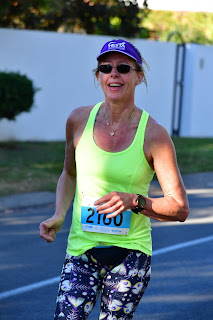 Two k to go and I started to feel an embryonic stitch. Oh crap - not now. Breathe out hard. Push against the diaphragm. Yep, that helped for just a couple of minutes and then it was back. Whatever. Just have to suck it up and make the best of it. No one ever died from a stitch. That I know of.

And then there was just one kilometre to go. I still had no idea of my overall time and I didn't really care. I was tired, I had a stitch but I was still giving it all I had. I could hear the loudspeaker. Getting closer. Iven cheering me in. The finishing arch. Sprinting (okay not actually sprinting - just pushing it up a gear). And then I could finally stop my watch.

1:40:37. Only 8s slower than last year. Maybe I'm in better running shape than I thought I was. At least my head is in good running shape - if that makes any sense. I didn't wave the white flag once. No retreat, no surrender!

Seriously nothing beats the feeling of achieving better than you'd believed yourself capable of. Except maybe seeing your friend smash her PB. Awesome run Jess! And then meeting a celebrity vet who turns out to be as nice as he seems to be on TV. Dr Chris was pretty impressed with how fresh we looked after running a half marathon. Probably didn't quite smell as fresh as we looked but the man spends his days smelling poo, pus, farts, wee and vomit so I'm guessing his nose might be forgiving when it comes to sweat.


So that's half marathon #22 done and dusted. #23 happens in just over four weeks time and I've got goals for this next one. Goals that I'll pretend aren't goals because I don't like the pressure of goals. A few more weeks of solid training and we'll see just how close I can get.