A Work in Progress

By popular demand I've decided to post interim pictures of the new kitchen. Just remember we still have the tiles, painting and floor to do. 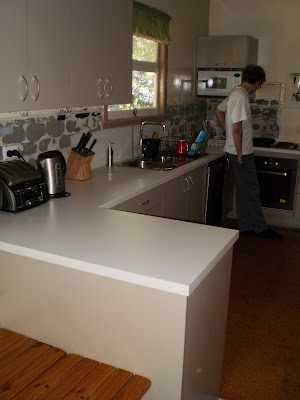 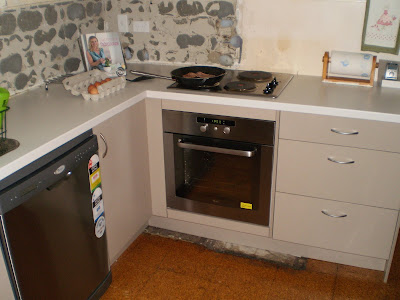 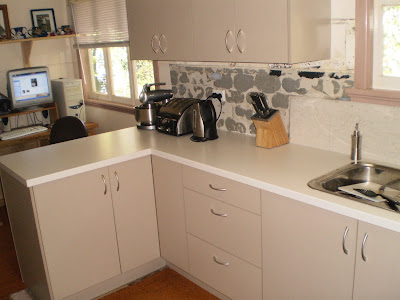 I've spent a lot of today in my new space and I'm loving its workability and the extra bench space. I could bake on one side of the kitchen while one of the boys cooked breakfast over the other and we didn't get in each others way. And I'm getting to know my new oven on quite an intimate level and I'm liking her. (yes - I've given her a gender but not a name. That would just be weird) So far she'd turned out vanilla cupcakes (my first effort that didn't work so well because I hadn't read the instructions for the oven), caramel slice and date and white chocolate scones.

This week has been a little weird as far as running's been concerned. On Tuesday I went to speed session as usual but struggled a little and afterwards I became really nauseated. It freaked me out - felt like overtraining syndrome all over again. I emailed Coach Chris and alerted him about it so he modified my program. Thursday I ditched hills (too intense a session) and just went for a run where my only aim was to keep my HR low. I felt good afterwards - yay! Then Saturday I did a 15k run with the group despite only getting 4 hrs sleep the night before and again I felt good during and after the run. I felt even better after I had a nap in the afternoon.

So why did I feel so bad on Tuesday? Maybe my Gold Coast weekend took more out of me than I'd expected but I did rest most of the week after. Last weekend was pretty tiring having to unpack the entire kitchen. And having our house full of workmen was a bit unsettling. Maybe it was just the accumulation of everything. It's made me so aware that OTS can come back at any stage if I'm not vigilant and sometimes I just have to pull back on training of there are a lot of things happening in my life.

But today I'm feeling good again. I've had a restful weekend and I'm loking froward to a good week of training.
Posted by Char at 10:55 PM