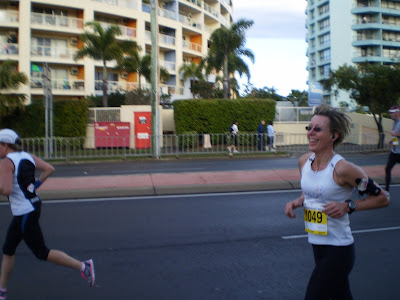 It was always going to be a big weekend. Two races in two days plus lots of cheering and catching up with friends. I'm knackered!

We set off on Friday afternoon at 4 pm to drive the one hour trip to the Gold Coast. We'd thought that it'd be early enough to miss peak hour traffic. Not so! We hit it big time and the one hour trip took two. We were almost at the unit when I asked Iven to get the keys out of my bag. He couldn't find the bag. I pulled over so I could have a look - no bag! I'd left it complete with my wallet, phone and, of course, the keys to the unit back in Brisbane. Ughhh! All we could do was turn the car around and drive back home. Four and a half hours after leaving home originally we arrived - not a great start.

I've been a bit nervous about doing the double for most of the week. And I was especially nervous about the half after having such an awful run in Sydney last September. I'd decided to be very conservative in the 10k. Well I wasn't as disciplined as I'd intended. Instead of running a steady 55 mins I finished in 51. It wasn't a hard run by any stretch of the imagination but I was still thinking of the 21.1 that I had to run in less than 24 hrs. And I was still terribly nervous. I'd felt sick in the stomach before the race ... and after the race ... and while I was eating breakfast ... and for the rest of the afternoon. It made refueling a bit of an issue. I also hadn't slept well on Friday night and again Saturday.

So I was really surprised that I woke up today feeling okay - not nervous or anxious, just happy to be at last able to get out and do it. I got to the event precinct about 50 mins before we were due to run. then spent the next 30 mins trying to find a toilet that had a smallish queue. No luck there! There were plenty of toilets but huge queues. In the end I decided that I didn't really need to go.

A couple of my running friends and I decided to run in the 1:50 - 2:00 hr group. Big mistake! At a run that's has a lot of rookie runners it's probably better to underestimate your time. I spent 10k dodging and weaving around people who were much slower than me. My splits for the first 10k range from 5:22 to 6:05. After the 11k marker things improved a little and I was feeling pretty good so I ramped the speed up a little - the range for this 10k was between 5:02 and 5:10. My finishing time was 1:52 and I'm not disappointed at all. It was controlled and comfortable and a real confidence boost plus I actually got to enjoy the run.

Usually I don't remember much that happened during a race but because I was so relaxed I have a few interesting bits to share. For a while I was running behind a woman who'd had a wardrobe malfunction (I'm hoping it was a wardrobe malfunction)She was in her mid-50's and had a great tan but her shorts had ridden up to reveal at least four inches of tanned but wrinkled cheek on each side. I also got to run near someone who'd had a Code Brown - I ran past them as quickly as possible. Then there was the golden retriever who was guarding his front yard and didn't really know what to do about the 6000 runners who were potential threats to his property. The poor thing had given up barking and was just whining mournfully.

I think I'm so happy with my races because just a few months ago I couldn't run much more than 10k - let alone with any speed. And even though it wasn't a PB or even close I'm thrilled that I'm able to start trusting my body again.

So this week will be a recovery week - just two sessions and the weekend off. And next week marathon training will start. I'm excited. 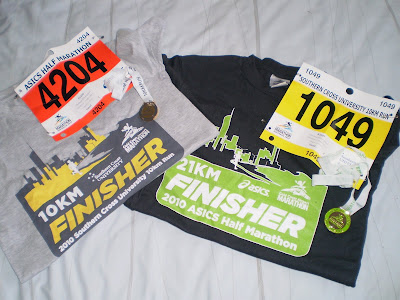