Old Men and Their Old Cars 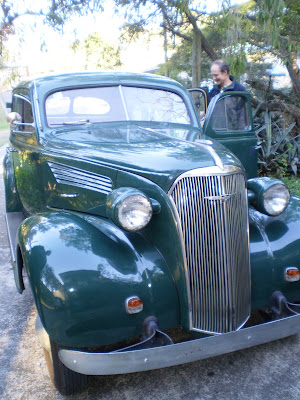 Today I got to ride in my Dad's new car. He bought himself a very special present for his 70th birthday. It's the same car as his first car - a 1937 Chevrolet.

Getting into the car seemed so familiar. It smelt like my childhood - like my Grandpa's old truck that he used to take his produce to the markets. It smelt of times that were slower and less stressed and way more fun.

Mum told me about driving the old Chevy back when we were kids. The time it rolled down the hill and wrecked a neighbour's fence (without much damage to the car at all - they made them sturdy back then). The time that Dad put his arm through the window (he'd thought it was down) and cut himself badly. He'd run inside holding his bleeding wrist and yelling that he'd cut his jugular (anatomy was not his forte).

The most interesting story was when I was a baby. Back then there were no baby capsules or car seats with harnesses. There weren't even any seat belts. Mum put me in a carry basket on the backseat. When she had to brake suddenly, Newton's law of Inertia took effect - the basket toppled over and I fell onto the floor. I've finally worked out why I'm scared of flying!
Posted by Char at 12:10 AM