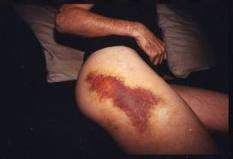 This post is probably in the realm of too much information. So if you're squeamish about bodily functions best look away now.

This morning was speed session. Now for speed session I have to take some special precautions. I've had three fairly good sized babies and sometimes, the extra strain of running speedily causes some unwanted issues. (For the slower among you who take a while to pick up on things - issues = wee and precautions = pad) Ha ha - now I bet you're wishing you looked away.

We've been having lots of rain so the humidity, although it wasn't actually raining at the time, was 93% and when the sun came out it may as well have been raining with the sweat my clothes had to soak up.

After the session I went to shower at the athletics track. First of all I had to go to the loo to remove the aforementioned pad but, maybe due to all that sweating or substandard adhesive, the pad was already loose and it fell into the toilet. Oops! I knew it couldn't stay there because it might clog up the works so I tore off a piece of loo paper to fish it out with. I tried to turn and fish while still sitting but, being slippery with sweat, I slid off the seat. That has to be one of the most awkward moments I've had. I hope I don't have to explain the bruise on my buttocks to my husband.

(Disclaimer - the buttocks in the picture are not mine. Note the arm - it's way too hairy to be mine.)
Posted by Char at 4:54 PM