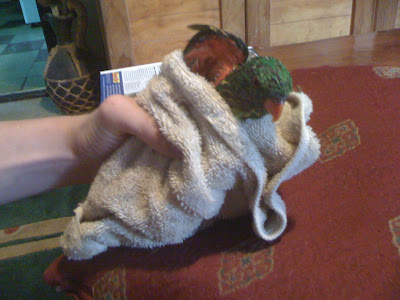 I spoke a little prematurely yesterday about no injuries. It was raining pretty heavily most of the day and one of the chickens was doing fence patrol when she caught sight of a small sodden lorikeet hopping around our back yard. I was in the workroom and her antics attracted my attention and, being an ex-vet and lover of animals (except the ones that poo in the middle of the night where you can walk in said poo), I thought it was up to me to rescue the poor defenseless creature.

I got a towel and threw it over the lorikeet. It wasn't happy about having his freedom curtailed and his squawks made the dogs almost manic. I took it up to Sam so he could look after it while I was looking for a cage. I opened the towel a little but put my finger too close ... 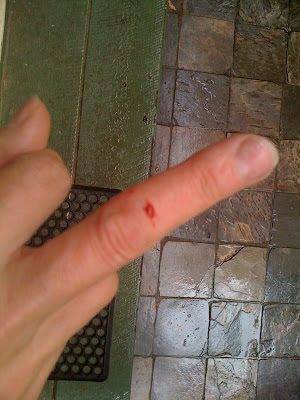 Those birds have really sharp beaks! But that HAS to be the end of my injuries for a while - that's the third one and bad things only come in threes. Don't they?!!

My second birdy tale involves the Rockettes. They've been a little parsimonious with their eggs lately and when I went down this morning I reached under the one on the nest to find there were NO eggs. They've often given us one egg but never none. I lifted her up a bit to make sure I hadn't just missed feeling it and, sure enough, nothing! But she was being really patient with being disturbed so I gave her a nice pat and some kind words and, like magic, an egg appeared. Talk about fresh!
Posted by Char at 5:26 PM